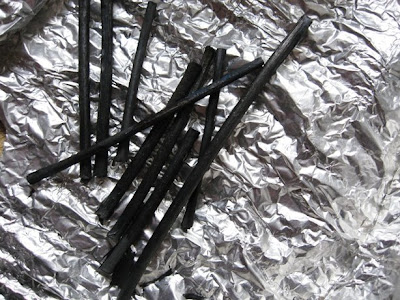 I was reading about making charcoal and it seemed pretty straight forward so I thought why not? There are usually clean up fires of branch limbs from cleared land and firewood burning in late winter and early spring while the ground is still wet, so a few experiments took place.

Pieces of grape vine were wrapped in double layers of heavy foil and placed near the edge of the first fire. It got too hot and they disintegrated as well as the foil more or less. We always learn from our mistakes, so the second batch was wrapped in foil again and placed in the ashes of the fire was it was dying down. The is a lot of heat in a large fire and it still is hot the next day which was when this bundle was retrieved. And it seems to be a pretty good success. Some pieces are not completed carbonized but for the most part, they are quite usable and are what I would class as 'hard' charcoal.

I'm not sure how to create the different levels of softness in charcoal. Is it the type of wood used or the length of time it is carbonized I wonder? I have lots of willow on the property which is what I will try next and there are still grapevine cuttings that I'm keeping for future burns.

My sleeping patterns vary and I'm usually up very early which was probably lucky for Tripod, the cat this morning.

I was sitting in the dining room writing and having coffee. The cat wanted out at 5am and around 6 I heard strange sounds outside. It sounded a bit like the geese in the pen in the woods but like they were a bit hoarse. I ignored it for a couple of minutes then it continued so I got up and looked out of the living room window and saw Tripod who started coming towards the house when he saw me.

Then I saw the fox. This was the sound I had been hearing, the fox barking. 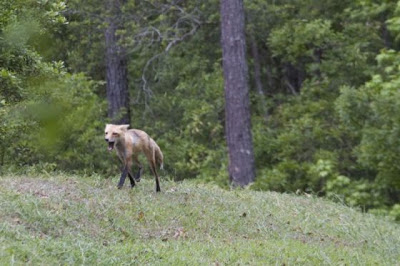 A vocalizing fox - wikipedia
This was a large fox and pretty skinny, but he had the cat on his radar big time. He was in a crouch almost the same way as a cat about to pounce on its prey. His lips were back showing his teeth and his nose wrinkled up in a snarl. For a split second I didn't know what to do then reacted, racing outside - still in pj's and starting waving my arms and shouting at the fox and, stupidly, telling Tripod to stay still, as if he would.

The fox looked at me and backed up about 2 feet, but was still intent on Tripod who was coming towards me and the safety of the house. I moved towards the fox again, and part of me wondered 'what if this fox is rabid?'. The fox moved off a few more feet and we kept up this game right up to the meadow when I resorted to caveman tactics - throwing rocks at it.

He finally ran across the meadow into the woods and I was left in the field realizing it was cold and wet out. The cat was none the worse for wear, but telling me all about it in no uncertain terms as he ate his breakfast.

This fox has been around for a few months and has become a nuisance. It attacked the Embden geese last month, killing the large male and badly injuring another, then also attacked BD and Buddy, my favourite Muscovy ducks leaving Buddy limping and uncertain of his fate for a week. Foxes don't usually act like this. They are noctural and should be very wary of people, scooting off at the first sign of one. It makes me wonder if something is wrong with this animal.

I can't prevent the cat from going out nor the geese or ducks, but its always a worry when things come out of the woods. There is always something trying to eat something else on the farm.

Meanwhile, tomorrow I go to Toronto for some meetings, then off to Ottawa on Sunday to stay with a friend for a few days. I will have my laptop with me, but I don't know how much time I'll have to make posts. I will be hunting down whatever art supply stores while I'm there and will of course have my sketchbook with me. No matter where, there are always drawing opportunities - and space in my suitcase for more art supplies.

Posting will resume on Thursday if not before.
8 comments: 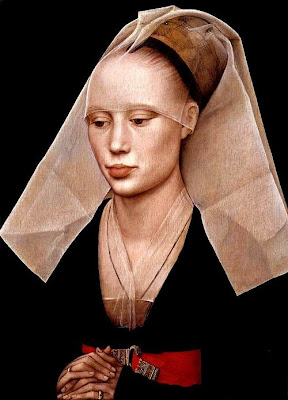 Portrait of a Lady - c. 1460
Rogier van der Weyden
There is something very appealing to me about exploring paintings or drawings from the past. I love looking into the historic background, the clothing and the lifestyles of the period. I like examining how the artist created what he or she saw or imagined and I especially like the portraits.

I treated myself to a calendar around Christmas time that is produced by the National Gallery of Art and consists of a page a day of different art works. Today's image is Portrait of a Lady by Rogier van der Weyden, painted in 1460. 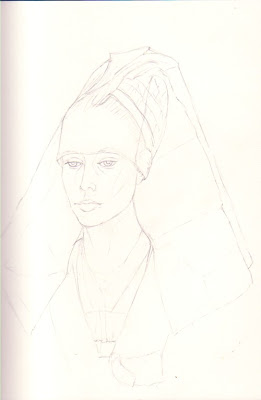 I sat here tonight doing a line drawing of this image , trying to recreate the peaceful (or was it bored) expression on the woman's face and the delicate folds of the gauze head dress. I love how van der Weyden paints the hands in all his portraits in such detail. But in this particular portrait I think the hands are out of porportion and look far too small. But it doesn't detract from the overall image.

I've made her features too delicate in my sketch. The face needs to be strengthened and made broader perhaps. I'll be exploring more of van der Weyden's portraits and see how they translate into drawings and I may even tackle one as a painting.
8 comments:

The Joys of Spring 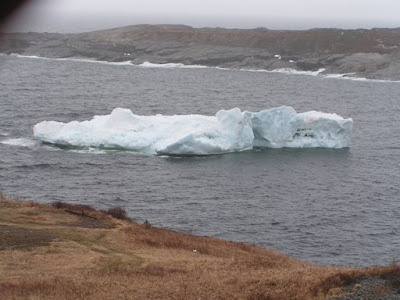 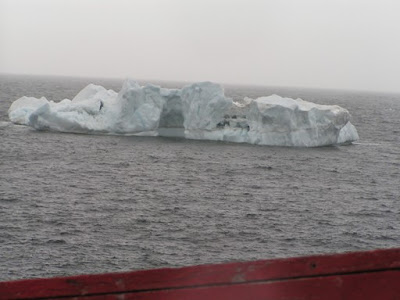 There is a northeast flow of air which means cold, damp, foggy air and a northern wind that blows ice our way. The days are grey and all of the colour seems to wash out of the landscape. Kevin Spacey, when filming The Shipping News here, was quoted as saying that Newfoundlanders have four seasons: summer, fall, winter and misery. April is misery. There are teasing glimpses of heat and hints of green new growth only to be smothered by freezing rain or days socked in with bonechilling RDF (rain, drizzle and fog).

By the way, don't judge Newfoundland by The Shipping News. Its beyond depressing, that movie, and doesn't bear any resemblance to the reality of the province.

So in weeks like this, I take pleasure out of small things like these on the drive home tonight. Nor'easters bring these 10,000 year old chunks of ice onto my doorstep where they sit, melting in what they consider warmer waters. When the sun comes out, it hastens the melting process and pieces of ice break off, called 'bergy bits', that nestle up against the rocks on the shoreline, turquoise lines going through them like some rare aquamarine or opal gemstone.

With the snow melted, animals start stirring from the bowels of the forest and I caught a glimpse of this cow moose out of the corner of my eye making her way through the trees towards to road. We made eye contact and I hoped no car would come the other way as she trotted out onto the road for a few moments then leaped over the guard rail and was gone again. For such large animals, they can move so quickly through heavy brush and trees it amazes me.

Moose, however, are a real danger on the roads in this province with many fatalities due to vehicle/moose collisions. With long legs, these animals are hit by the car in the legs so then end up sliding across the hood of the car straight into your windshield. Not a happy ending for man nor beast unfortunately. And with the woods leading right onto the roads in many areas, you don't see the moose especially at night until it is too late to stop. 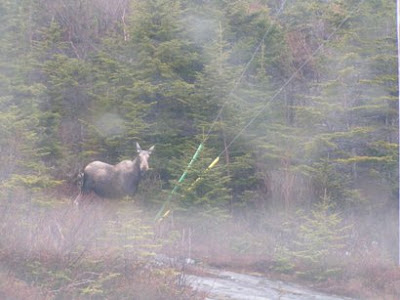 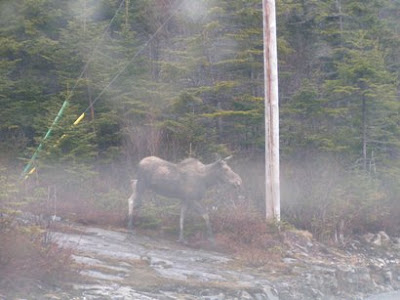 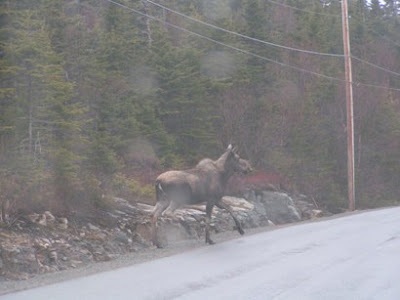 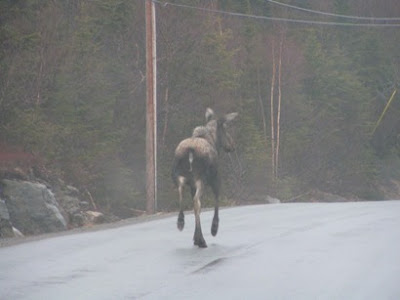 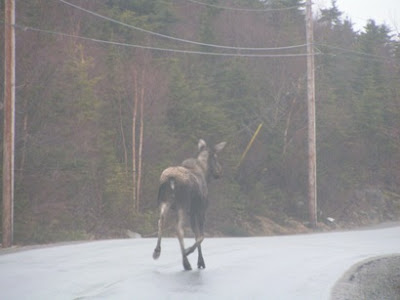 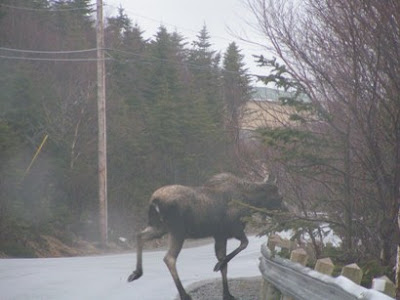 It sometimes pays to have the camera handy in the car, even if fog and rain don't make the best photo from inside the car.
6 comments:

What Famous Leader Are You?
personality tests by similarminds.com

What Classic Movie Are You?
personality tests by similarminds.com