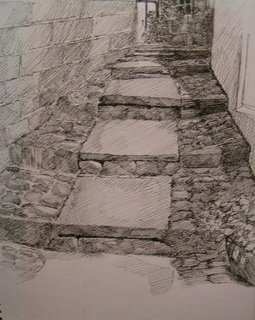 The aim of every artist is to arrest motion, which is life, by artificial means and hold it fixed so that a hundred years later, when a stranger looks at it, it moves again since it is life. ~William Faulkner

I lived in the UK for about 15 years, both in the London area and the Southwest in Somerset. After moving south I still migrated to London a few times a year either alone or with children in tow. This reminds me of London so much.


You Know You're From London When...

Self portraits are simple compared to creating a portrait of someone else. Especially someone who is paying you money for it. And even more fraught if the person doesn't agree with the reality of themselves as portrayed. This is likely why I prefer to stick with animals. A whisker here, a smudge of fur there and the world doesn't come to an end. With a person, the likeness can be lost in the careless stroke of a pencil.

Even in a perfectly executed portrait there will be people that you can't please because they have a self image that doesn't match what you see and what they refuse to see.

An artist friend years ago, Roger, made his living form portraits. He used to say that the worst portraits to paint were middle aged women who thought they were still 21 and young girls who's mothers thought they were beautiful when they were not. Roger was a true eccentric and a brilliant artist. He drew exact replicas of what he saw in front of him and likenesses could not be faulted, but from time to time, one of the middle aged women or mothers of a not so sweet adolescent would beg to differ and ask him to change the image to what they wanted to see.

Roger would do it but with such reluctance and bad temper that the individuals would never dare ask again for changes. It was a joy to see.

I am currently drawing a portrait of my daughter. The initial stages are here and will be posted as they are completed. This photo was taken in early morning light with a digital camera and seems to have turned everything blue for some reason. 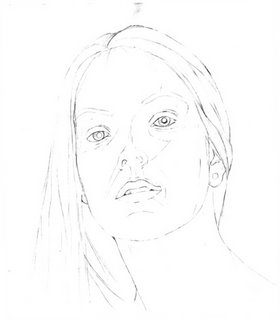 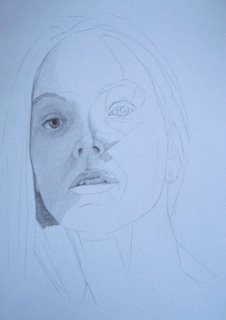 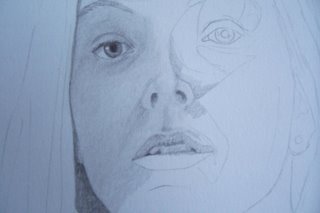 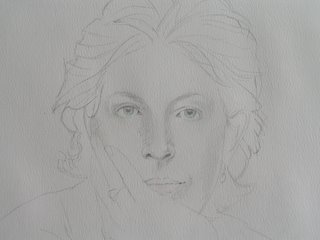 At some point in every artist's life a self portrait is considered or forced upon you.This is good and bad. For hundreds of years it has been a teaching tool and has been used by some of the most famous artists.

This is a self portrait done within the last few months. Other artists have drawn my portrait and no two are alike. This makes me wonder if I am biased in what I see or do others see something entirely different than I do? I only ever see myself in a mirror and then under controlled lighting. I never see the real me, not the one that others see. Which is the real image? It becomes an Escher-like question, going round and round, up and down without ever reaching a destination.

Self portraiture is self discovery in its truest form. You examine yourself minutely and put your regrets with your pleasures, hoping to place them all on paper or canvas and convey the real you.

A mirror or a reference photo, the right lighting, then choosing your medium are all fraught with worry. And that's even before you make a mark! You see things you never noticed previously in yourself and you think about everything and nothing as you create.

It is an amazing and somewhat unsettling process but highly recommended.
No comments:

I hate when I do this. I wrote a whole post then pressed the wrong key and it died and floated off to neverland. Sigh.

I can't recreate it as my mind won't allow the words to form again, not the same format anyway.

Today is my birthday. I wonder how I reached this age. 52. It is the age at which I thought my parents old when I was in my 20s. Now that I have reached that age, it is not old. 52. I like it.

Today was also Michelanglo's birthday. How many people know his surname and his history I wonder. How many people are known by their first name only and it stands alone, able to carry knowledge and wisdom and experience. 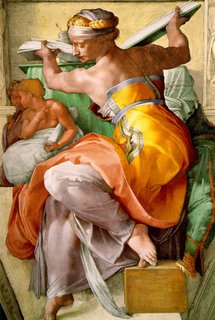 And my mother. It seems appropriate on my birthday to include her, as she had a pivotal role in my creation. She is now 81, this was done about 15 years ago. 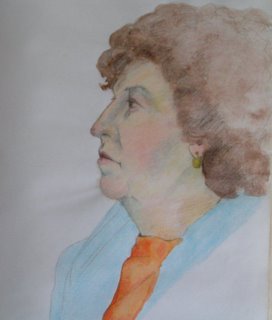 I've always said that I was born 200 years too late. Part of me longs for an era when life was simpler and the view of the world fresher. Yes, there were many disadvantages 200 years ago, even 50 years ago for that matter.

What beckons me to explore the past? In art it is colours and shapes and the ability of artists to capture a moment with immense clarity and tone without the benefit of digital cameras or the comfort of art supply stores or marketing gurus to sell their work.

Classical art is known as atelier style, working on studies of anatomy and sculpted figures then advancing onto real life, oils being the most common medium or soft pastels, conte pencil or charcoal.

There are a number of artists from the Victorian era that capture my attention and have me sighing over their work. John Everett Malais was one of them. Millais's image of the tragic death of Ophelia, as she falls into the stream and drowns, is one of the best-known illustrations from Shakespeare's play Hamlet. 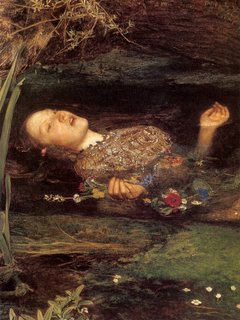 Ophelia is a character created by William Shakespeare who appears in his play, Hamlet. The story of Hamlet is tragic-- it is one of intrigue, deception, madness, death and suicide. Ophelia's role, even though she is a minor character in the play, is particularly haunting. Ophelia is in love with Hamlet, a young and emotionally tormented prince, who was once loving to Ophelia, yet has suddenly become abusive and cold. Ophelia clings to the memory of Hamlet once treating her with respect and tenderness, and she defends him and loves him to the very end despite his brutality and developing manic madness. As the play unfolds, Hamlet spirals into a full-blown psychotic manic episode.

Having a shaky adolescent identity and low-self esteem, Ophelia lives to please the men in her life, who never seem to accept her or love her in return. Ophelia's emotional frailty and young innocence work against her, as she cannot cope with the unfolding of one traumatic event after another, which all seem to center around the men in her life, including her father, who forcibly prostitutes her. The final straw is when Hamlet both rejects her and cruelly humiliates her after she has been sexually intimate with him. Hamlet mocks the fact that Ophelia is sexually experienced, and goes as far as to say that he never loved her. Ophelia's character shows nothing but loving kindness to Hamlet throughout each scene.

Unable to cope with Hamlet's rejection and abusive cruelties, she ultimately falls into a dissociative state and wanders to a river, collecting flowers, singing love songs, where ultimately she drowns herself after adorning her hair with flowers symbolic of her relationship with Hamlet:

There's rosemary, that's for remembrance. Pray you, love remember. And there is pansies, that's for thoughts. There's fennel for you, and columbines. There's rue for you, and here's some for me. We may call it herb of grace o' Sundays. O, you must wear your rue with a difference! There's a daisy. I would give you some violets, but they wither'd all when my father died. They say he made a good end. And of all Christian souls, I pray God. God b' wi', you.

Tragic and sad, but always compelling, both the image and the play.

More sketching today, snatching moments of time when I could. The first of Alcatraz prison in the fog which was closed in 1963, as seen from a street in San Francisco. 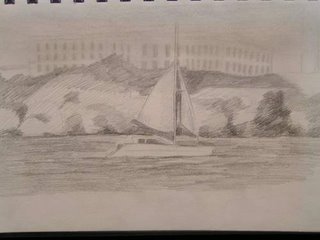 The second sketch is the beginnings of a portrait of my daughter. I start a draft sketch of portraits to get a feel for them. I find nothing worse than getting half way through a drawinng and deciding that I don't like the lighting or the tone and then hate each pencil stroke to completion. 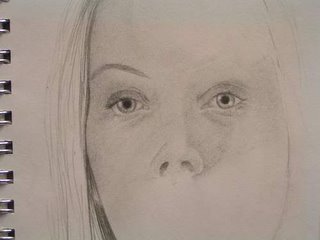