Cliffs of Moher - in progress 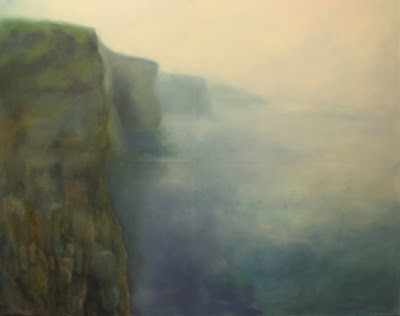 Many years ago, I lived in Ireland for about a year.  During my time there, I visited most of the country with the exception of Northern Ireland. At that time, 'the troubles' were in full force and it wasn't a wise move to go there.

One of the places that I visited was the Cliffs of Moher in County Clare.   I had almost forgotten about them until a random wander down one of the many rabbit holes on the internet, led me to a site about them.  They are truly magnificent chunks of rock rising some 214m above the sea and are home to many nesting seabirds.   They remind me very much of the shore line here along with the seabirds, rock and ocean.

I knew I was led to the Cliffs for a reason and it was to paint them.  I pulled out an old canvas that had been sitting in the basement 39 x 31 (I don't know why its such a strange size - perhaps age explains it) and started laying on colour last night and throughout today off and on.  The mist and fog is as common there as here and softens both the rock faces and the sea.

I'm adding more definition to the nearest cliff and there will be many layers to do yet.  The old canvas has relaxed a bit and the pressure of the brush against the stretchers shows a little of their outline in places.  I will tighten the canvas when it dries a bit more to eliminate that in the next layer.

This is being done in oil and its giving my biceps a good workout!
12 comments: 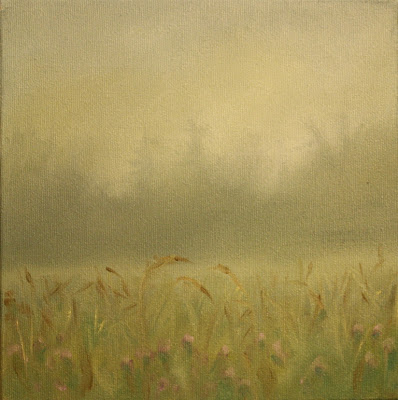 The summer of 2011 has been a complete and utter washout.

In the last 70 days, there have been 10 only in which is has not rained.  In August so far, it has rained at some point every day with no sun.  And there is no warmth to it either.  The high today?  13C.  Not exactly balmy.

Now I know I shouldn't complain as other parts of North America are sweltering under a blisteringly hot sun.  But come on weather, just a little heat and a little sun, even one day a week?  Please??

So, given lemons - or in this case fog - I will paint the world as I see it today. Shrouded in low lying cloud, misty, damp and cool.  Actually, I rather like fog.  It gives a sense of mystery to the world and softens outlines and colours.   This is the hazy view of the meadow in today's dense fog - and driving home it was dense, the original 'pea soup' fog, as I've always heard it named when it closes in low and thick.  The term actually referred to a thick yellowish smog that was prevalent in London and caused by the burning of soft coal from industry and thousands of home chimneys.  Being a British colony until 1949, the term translated to Newfoundland and referred more to sea fog, as there is little if any pollution here.

This is painted in oils on an 8 x 8" gallery canvas.
8 comments: 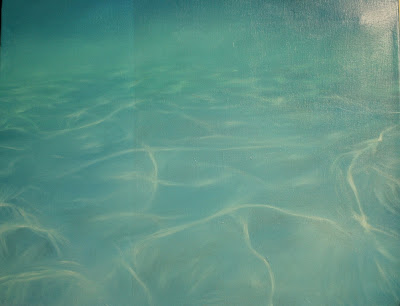 The range of what we think and do is limited by what we fail to notice. And because we fail to notice that we fail to notice there is little we can do to change until we notice how failing to notice shapes our thoughts and deeds. (Ronald David Laing)
The patterns of light or reflections in water really interest me.  They're so subtle and it becomes a real challenge to try to recreate them. Its what art is all about isn't it?  The ability to observe acutely and translate what you see onto paper or canvas without your brain turning it inside out is a challenge artists conquer in varying degrees.

I've often wondered why observing comes more easily to some than others.  Is it a trained eye over time or do some people simply lose interest in an object and never really take time to see the shapes, colours and values, presuming that their brain will feed them the correct information based on past experience?  What makes me see the subtle tracery of the lines of light going from faint to strong when another sees only a solid line?  Is it down to training and practice or is it an innate process?  Perhaps a combination of the two.

The art of drawing seems to be dying in some ways, but I believe it is the most important tool that an artist can own.  My background training was drawing. Constant, repetitive, technique over and over and being forced to see what was in front of me without an option of bailing out or slapping paint on to hide my inability as a draftsman.  Maybe that is why I find detail so appealing and see the minutia in life.  This morning on my drive to work, I was stuck in roadworks and spent my time studying weeds on the side of the road, thinking what a wonderful painting a section would make.  Others see the larger view.  I see the ant's view.

I can't resist adding more light traces to this watery piece, even though I know I need to wait until its dryer.  There is an advantage of having the paint slide on easily into a wet layer, but it also lifts up the initial layers that I put down.  So I must be resolute and ignore this painting for a few days and perhaps begin a new piece.  I'm just not sure what that will be yet.
5 comments: 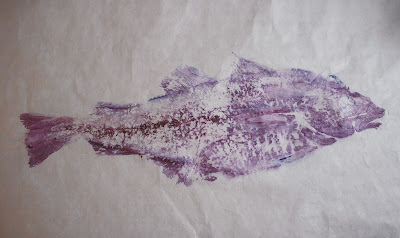 In Newfoundland you can't simply go out and randomly catch an ocean fish, you have to wait til the government sets the Recreational Food Fishery sets a date for a few weeks a year to fish.   The dates in 2011 are July 24 - August 14th withs another couple of weeks later in September/October. 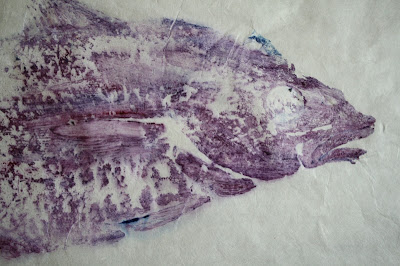 So with the chance of some fresh cod for the freezer, a trip out in a boat was taken.  Not by me I might add.  I don't do small boats on the ocean unless the big one has sunk and I have no other choice.  Some cod were caught for the freezer and I obtained my small printing cod to play with.  I haven't done a lot with cod, as they're difficult to come by.  It sounds strange saying that, as cod was the staple of everything Newfoundland for so long and is what drew many countries to the shores.  People find gyotaku a strange thing and the concept of sacrificing a fresh cod to use for printing is almost sacrilege.

I did a half dozen prints of this cod before I popped it into the freezer for another day.  I don't find them wonderful fish to print with.  They're a bit soft fleshed and the skin tends to wrinkle easily, making it difficult to get a strong image.  The fish I used was about 14 inches long and I printed it on several different papers to find a suitable print.  I still have to add eyes and decide if I'll take it further or not with colour.  I may try one of the prints as a wax batik and see how that turns out.
3 comments: 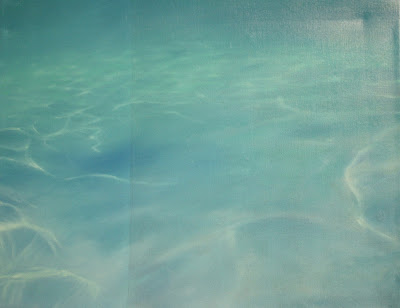 I'm in recycling mode again and pulled out an old canvas to use.  It had a light/dark base on it and I didn't give it a base coat of gesso before starting this painting so the initial coverage isn't complete and I see the demarcation line dividing the previous painting's colours.  Also another painting was resting against this canvas and there is a slight indentation.  However, these things should resolve themselves, otherwise it becomes a study!

The weather this summer has been beyond miserable.  It has to be the coldest, windiest, wettest summer on record with day after day after day of relentless grey.  So I decided one way to beat it was to create some tropical looking water so I could at least pretend it was warm.

This will be a view of a lovely turquoise sea with the sunlight rippling across the sand on the shallow bottom, stretching out into deeper water.   This is the start of the piece in oils, 14 x 18" I think - I didn't measure it - on gallery canvas.
9 comments: