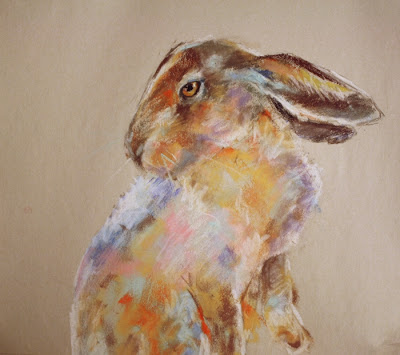 Mad as a March hare.

The first time I saw that expression come to life was a peek through a tall hedge on a tiny back road near the farm I lived on, close to Combe St. Nicholas in Somerset.   I was walking the dogs and  a movement in the field caught my eye.  Two large hares were standing on their hind legs, whacking furiously at each other with their front paws.  I stood watching them for a short time, fascinated at their strange dance/fight.  The dogs, of course, wanted to join in, so it was best to move on with them.

This is a common territorial dispute around hare mating time which extends past March I'm told and I was lucky to have seen it in real life.  Of course no digital cameras or cell phones to capture the action then, just my memory.

March Hare in Newfoundland means something different, even through there are hares present, mostly Arctic hares, often mistaken for rabbits.  March Hare was once a little get together on the west coast of the province to break up a long dreary winter, but now has turned into an international literary festival, including work of local poets as well as some of the best writers in Canada and the world as well as the finest professional musicians from across the province.

My March Hare is a memory of the ones I saw in the hedge-lined field in Somerset years ago.  Done with a charcoal under drawing with pastel overlaid on newsprint.  And here's what they looked like in the field. 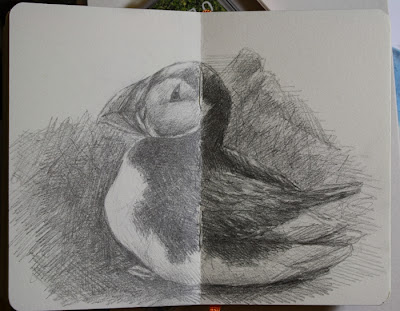 An Atlantic Puffin.  These birds are in the Auk family with a stocky build and colourful beak in breeding season.

Nesting colonies can be seen offshore on the southern shore of the Avalon Peninsula, a short boat ride away.  Often called "sea parrots" because of their coloured beaks, in Newfoundland they're sometimes called "sea potatoes" because of their chunky shape.  Such effort these little birds put into flying, with wings beating up to 400 times per minute and able to reach speeds of 55 miles per hour.  They swim underwater as well as they fly, but only for short submersion times of 20 or 30 seconds.

In December 2011, a baby puffin was found wandering on the streets of Montreal and flown by Air Canada back to Newfoundland for some TLC before being released.
6 comments: 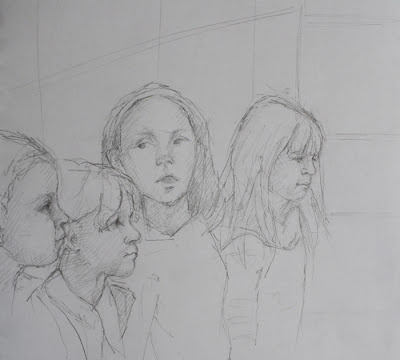 School is often the first formal lining up a child has to experience. Seeing the little faces makes me wonder what's going through their minds and their behaviour and tolerance for the ritual of order gives a glimpse into their personalities and future.

This sketch is of my grand daughter's first day of school.  Head of the line, she looks like she's been there, done that and has the t-shirt.
2 comments: 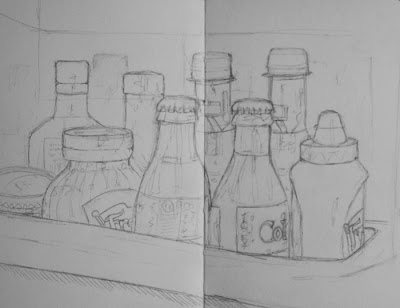 Your refrigerator that is.

For the last seven months I've been on a health kick and have lost a significant amount of weight.  As a result, the contents of my fridge have changed a lot.  One, there is a lot less generally in there.  Two, the contents consist mostly of fresh fruit and veg, meat and a variety of salad dressings.

Over on Daily Paintworks, where my small paintings now reside, a challenge is provided weekly.  This week it was What's in Your Fridge?   I'd never drawn or painted the contents of my fridge and thought it could make interesting compositions, so I took a few shots and found some that I liked.  Plein aire isn't really possible with the fridge door open for ages...

I haven't painted it yet, but here's a sketch of what's in part of the fridge door.   The small glass bottles of diet Coke I bought so long ago, they're probably gone off by now.  Like many things, I buy them as art props but still haven't gotten around to using these yet.   I rarely drink soft drinks, so there's little appeal to me to consume them, but the green tinged bottle with the classic shape appeals for a painting.

Hmmm, perhaps its time to have another look in the fridge.
2 comments: 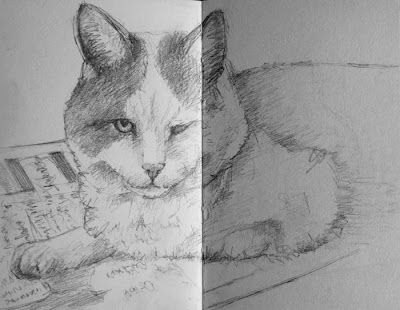 Tripod's been the "adopted child" for more than six years.   He was a cat living wild for a couple of years around the farm, then through a series of events ended up in the house and has stayed ever since.

His wild days still manifest themselves in his hunting ability, his blood curdling growls in his sleep, his fights with other cats who venture onto the property and, of course, his missing limb.

He's showing the signs of aging.  I don't know his age and the vet says his teeth are those of an older cat, so who knows precisely.  The injury to his front leg that caused the amputation is an unknown too, perhaps a snare, another animal, its hard to tell.  And I suspect there's  a direct link to his eye on the same side as it never opens fully and in this sketch, lying on his beloved newspaper, he looks a bit like a pirate.

Things you may or may not know about Tripod:
Yes, this cat is very, very different.  You'd really have to experience him to understand.  He's not your average cat at all, more like a dog in many behaviours. 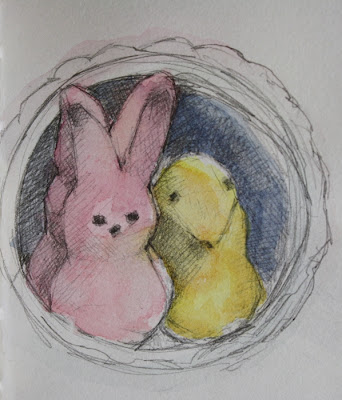 Equality.  Whether size, shape, colour or sexual preference, are differences really strong enough to cause hurt over?


Others could compare all the differences but none of the similarities, make these two keep hiding in the confines of the sugar bowl forever.

“Once upon a time they was two girls," I say. "one girl had black skin, one girl had white."

Mae Mobley look up at me. She listening.

"But neither one a them little girls knew. So little white girl say, 'Well, let's see. You got hair, I got hair.'"

I gives Mae Mobley a little tousle on her head.

"Little colored girl say 'I got a nose, you got a nose.'"

I gives her little snout a tweak. She got to reach up and do the same to me.

"Little white girl say, 'I got toes, you got toes.' And I do the little thing with her toes, but she can't get to mine cause I got my white work shoes on.

"'So we's the same. Just a different color', say that little colored girl. The little white girl she agreed and they was friends. The End."

Baby Girl just look at me. Law, that was a sorry story if I ever heard one. Wasn't even no plot to it. But Mae Mobley, she smile and say, "Tell it again.” 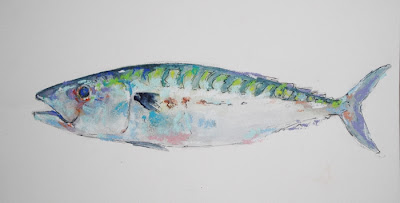 I was sketching out some ideas for new prints and one of them is a mackerel.  These fish are found in many parts of the world and there are a lot of variants within the species.   I love their torpedo like shape and dark stripes along the dorsal section.

This started as a simple sketch, then I added watercolour over that, then a little pen work and finally some touches of soft pastel to finish it off.

You can watch for another variation in print form in my Fishy Bits series this year.
No comments:

The salt-cod fishery was a mainstay of Newfoundland and Labrador’s economy throughout the nineteenth century. It consisted of three branches: an inshore fishery off the island’s coast, a Labrador fishery, and an offshore bank fishery. Of these, the inshore fishery was both the oldest and largest, with roots in an English migratory fishery dating back to the 1500s.

Until 1992, when the moratorium was announced.   The fishery is now a ghost of its former past.

And this is part of its past.   An old photo from the archives of a young fisherman selling his catch on the wharf at St. John's harbour in the early 1900s caught my attention as I browsed the archives.  The stance. the features, hand in pocket of overalls to keep warm, told the story of a life that comes with harvesting from the sea.  I needed to capture that in a quick oil sketch.
No comments: