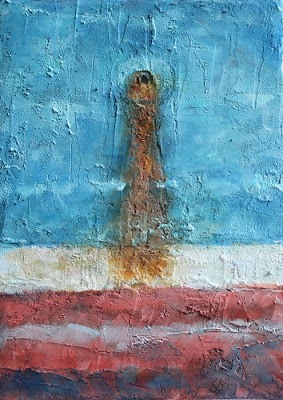 Available for purchase through Etsy


Last weekend I went on a little expedition to get some new reference material and ended up on a wharf in Petty Harbour, about 15 minutes outside St. John's.  Its a lovely, snug harbour with lots of boats lining the wharves and few more on land, some for sale, some in the midst of preparation for the fishing season. 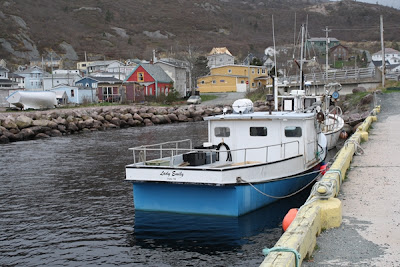 While exploring I came across the multi layers of paint on the hull of a boat.  The waterline and outlet above it showed years of use and rust making a path downwards.  It looked like a good image to play around with as an abstract.

I started with a 5 x 7 panel and laid modeling paste over it, sculpting it a little to mirror the lines of the boat stripes.  When the paste was dry, I added layers of oils on top which let the surface texture show through.
1 comment:

This is an update on the Weekend Warriors and while I'm still refining the boats, I'm working on the water to anchor them and show movement of current and wind.

Painting a water surface involves layers of colour and glazes to achieve the sense of depth and movement in the water.   Its interesting how a turn of the brush can create a completely new feeling in a piece.  Manganese blue, ultramarine deep, pthalo turquoise, indigo and titanium white are creating the water and work well against the brighter colours of the boats. Once I have more layers and glazes on the water, i can move onto the tiny details that pull it all together, then on to the next piece. 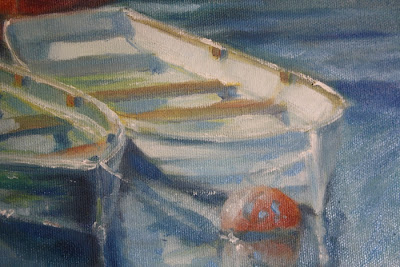 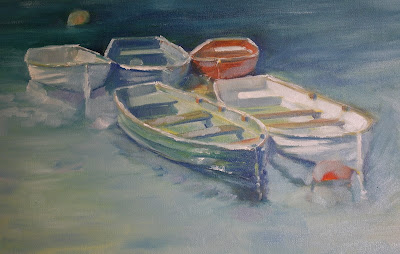 Small, colourful boats litter the water, moored together and reminiscent of the streams of small children from child care you sometimes see all hooked together so they don't go astray.  These are the boats of the weekend warriors. Those souls who secretly are adventurers in their heads and on the weekend, while confined to less adventurous lives from Monday to Friday.  On the weekend, they take to the land and water, each trying to outdo the other in technology, ability and sheer nerve.  It gets them through the next week.

This is about the half way point for this piece with more work on all elements required after this layer dries a little.  I like the strong sunlight creating shapes within the boats and eventually on the water surface too.  This is on stretched canvas, 10" x 20".
No comments: 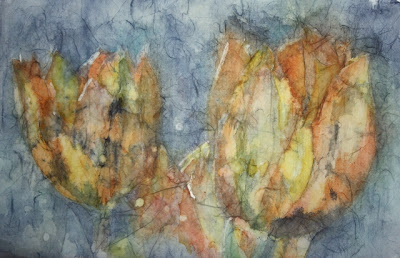 I offered a spring challenge awhile ago and agreed to take part in it.  Why I'll never know as I really dislike painting flowers in any form.  I know I can create form and colour but for some reason flowers just don't appeal to me at all. I put up this mental block against them. But because I'd agreed to join in, I figured I'd better show willing and have a try with the tulips.

I wanted to try a wax batik again and the contrasts in the colours of these flowers should work with this technique  I used unryu paper, a mix of beewax and paraffin and watercolour to build layers.  The process itself is quite quick to produce, as it seems once you get going, you want to see it through to the end to see the final result.  The layers of wax,  as they build, mask the final piece which isn't revealed until all the wax is removed.

Because I'd run out of ginwashi paper I tried the unryu but its a bit more fragile and doesn't take to scrunching as well before the final application of pigment and there are a couple of tears in the surface.  This is an easy fix as once its on a backing paper of the same surface its not noticeably.  The distinctive patterning that is batik isn't as strong as a result of less cracking in manipulating the paper less.  But the effect is there and does read batik.  The fibres in the unryu also help achieve the pattern.

I usually put a piece of parchment or wax paper behind the paper to make peeling it off easier but grabbed a cutoff of foam core board instead this time.  The board has a slick surface, and releases the wax easily. 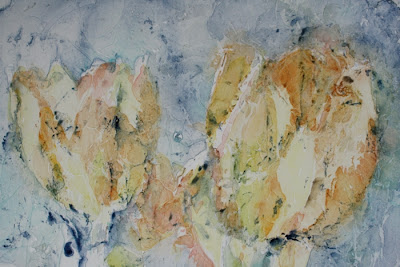 What I found when I removed the piece was the ghost of the original painting on the foam board.  It seemed too good an opportunity to waste, so adding more paint to the surface gave version two of the tulips. I wasn't respecting rules or shapes a lot in this piece and let water and pigment run and mix on the surface, which acts much like yupo. 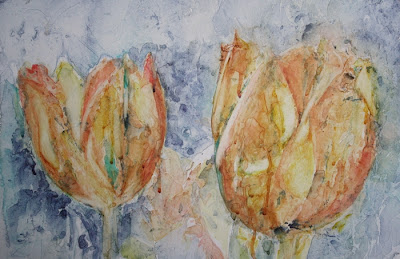