Tripod is a fighter in more ways than one.

First, he has a tenacious hold on life and has likely used up most of his nine lives by now through various incidents unknown to me, the most serious being loss of a front leg.  His feral ways show through from time to time and more so when he is asleep and dreaming.  He growls, hisses and spits in his sleep.  Scary, ferocious sounds that make the hair on the back of my neck go up.

As an intact male (The Other One takes it as a personal affront when I mention vet and neutering) territorial fights occur.  There are few cats around as I'm a good distance from any neighbours, but one does keep turning up and he and Tripod have disagreements.  Usually instigated by Tripod I might add.

Tripod is territorial to the nth degree, despises all other animals, especially dogs and occasionally a human who doesn't take his fancy.  I'm presuming it was something to do with his wild years in the woods.  Its extreme to the point that I would not bring another animal in the house.  A grown dog he would stalk and attack.  A puppy or kitten, I have no doubt he would kill.  So it seems he'll be an only cat.

This painting shows him at his finest after a night outside in the summer.  The sun was streaming through the window.  Tripod was exhausted and very cranky, sleeping on a throw on the sofa, wrapping himself into contortions to get comfortable.  He was sporting various superficial war wounds, his fur looked like he'd been through a bog backwards and did I mention how cranky he was?

Needless to say, I let him sleep.

The art of over tweaking 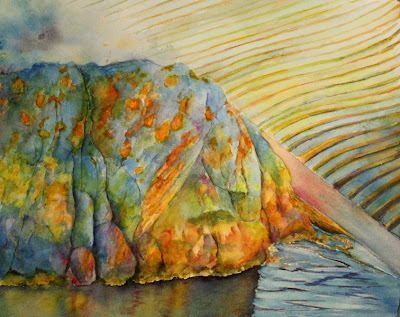 I overworked this piece and its gone to mush, but that's ok.  It was more of an experiment than an important piece.  And I enjoyed the bright colours on what has been a very dull week weather-wise.  I don't dislike the piece, it just doesn't quite match the vision in my head and I know it doesn't make my own personal grade for something that I would offer up for sale to anyone.

What is it in me that keeps adding 'just a little more' and pushing a piece over the edge?  I wish that a big red light would flash and alarm bell would go off when the ultimate brush stroke went down so I'd know I'd reach the point of no return.  A bit like those top chef challenges...."ok, your time is up!  Put down your brushes and step away from your painting!'  Unfortunately, there isn't anything external that can help me decide the final point and its down to gut instinct to know when a piece is complete.

For now it will brighten up a corner of the studio and I'm off in search of new inspiration.  A trip to a glorious sandy beach earlier this week gave me lots of inspiration for more pieces.  Sand, rolling surf and rocks - heaven! 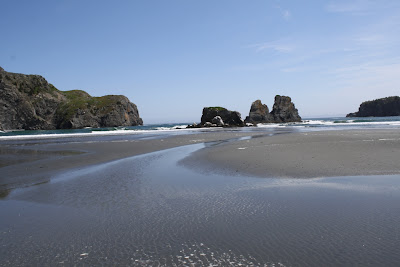 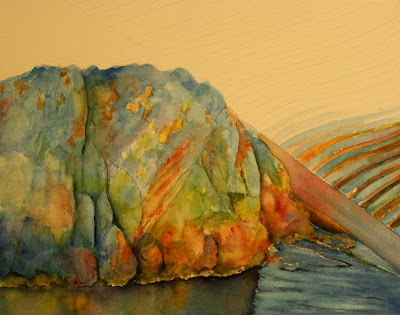 I'm still looking for the right inspiration to hit me and a few ideas are flitting around.  This morning I started a watercolour piece, inspired by a photo of lichen on a large rock by a slipway in Bauline.  The rock is like many other rocks in the area.  Grayish purple, with lovely orange caloplaca lichen growing on it.  This lichen is found on rocks near the ocean, above the water line and benefit from the ocean spray to help existence. 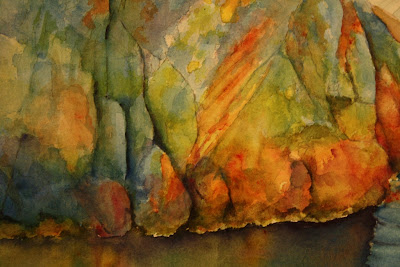 Rocks in all forms are fascinating to draw and paint and the brightness of the lichen pushed me in a different colour direction.  I decided to intensify the colours instead of going for a more realistic palette.  Values are values, no matter what the colour and I like the brightness and the direction its going right now.  I think the local fishermen might get a little concerned if they saw a rock this colour by the slipway however.

This is the first few layers of colour and detail will start to be worked into the rock soon.  Its about 10 x 14 on 200lb Arches paper.
4 comments: 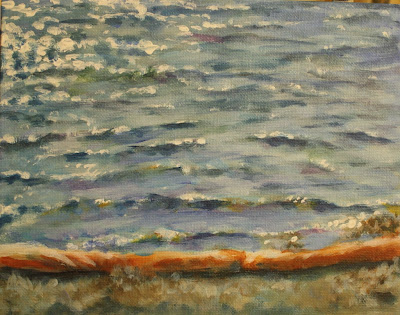 Water study I
8 x 10"
I've worked out ideas for a new painting today and kept rejecting them one by one.  The one above is one of them.  Its a quick study of the beach at Conception Harbour on a very windy day.  There must have been a spill of fuel so the shoreline was sandbagged.  The image study is fine, but just won't work on the scale and size canvas that I have in mind. So this evening I went out to get inspired and took some images of what I saw. 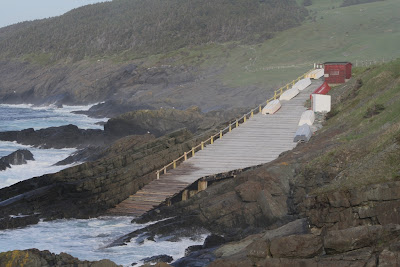 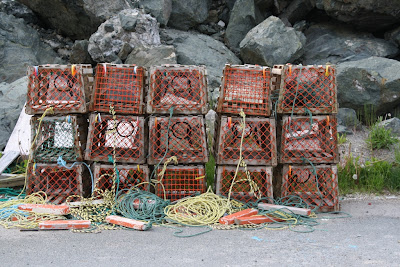 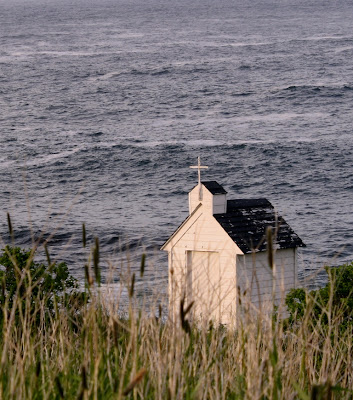 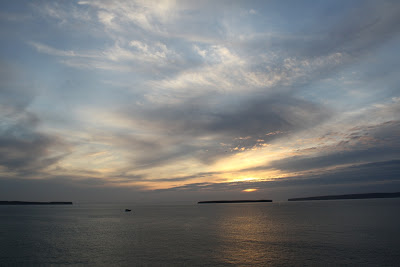 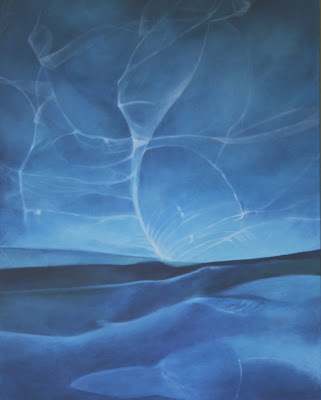 I'm calling this piece complete and will let it sit and percolate for awhile longer to see if any additions are required.  We can all seem to find ways to make additions to paintings can't we?  That fine line between having a painting look good and then pushing it to ruin in a few brush strokes is tenuous and often crossed.

The painting has a name now as well - Luminous.  Its quite abstract and several people who have seen it all see something different in it.  Just as art should be - open to interpretation.  I bought another, larger canvas yesterday.  24 x 48 is the longest that will fit across the seat in my little car.  I toyed with a 60" canvas then wondered where and how I would paint it as a regular easel just wouldn't cut it, I'd need to mount it on a wall to work on it.

I've spent a lot of today clearing out my studio, cataloguing supplies and putting them in accessible places instead of scattered around the room.  I also have some plans in place to create a second studio that will allow me teaching and production spaces along with more storage racks for paintings.  The second studio will involve some major reconstruction, so it may not happen for awhile yet.  It would be good to have that extra space where I can separate tasks and do some teaching and workshops more easily from home.
9 comments: