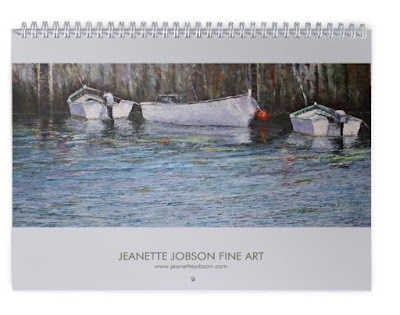 2016 Wall and Desk Calendars
Available direct from the artist

I know its too early to think about 2016 and I won't say the dreaded ******mas word, but you know we're in the last quarter of the year and, for me at least, time speeds up lately.

I was determined to get some calendars ready well in advance this year and sifted through boat paintings that I had created over the past year, picking out a dozen of my favourites.  I hope I picked some of your favourites too.  A painting of Flatrock harbour, in the town where I live, is the cover image for each calendar. 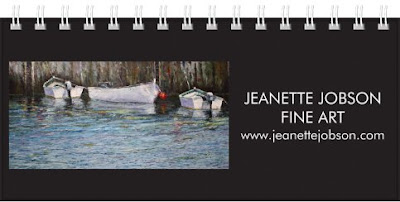 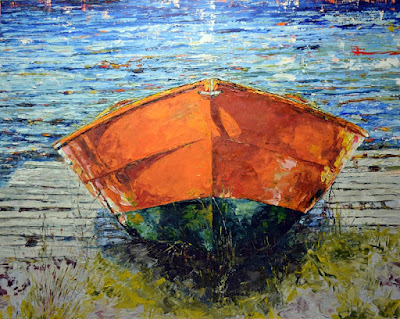 
Boats often have specific colours that attach them to communities or regions and this can been seen in Newfoundland as you travel across the island.  Shape, structure and colour play a part in defining the role of a vessel and its ties.

On the east coast you find mostly white boats, with dories being traditional "Dory Buff"  (yes, it is a colour!) but reserved for the Grandy Dory of the Burin Peninsula. When I say boats, I mean working boats, not recreational, although some boats flip from one to another depending on need. The standard yachts and sail boats tend to be white in most parts of the world.  I always wonder how people find them in a crowded marina.  But the working boats, small fishing craft, tend to be individualized or represent their region in colours.

The west coast of the province sees the introduction of oranges and blues to their boats and this past summer I wanted to add some orange boats to my painting arsenal.  When I was on the west coach, teaching in Gros Morne, I took some time to head down the coast from Corner Brook towards the Bay of Islands where I found lots of orange and green boats.  This one was sitting on a home made dock at Benoit's Cove.

There will be more orange boats in the future, as its difficult to resist that colour!
3 comments: