Yes, its another apple... 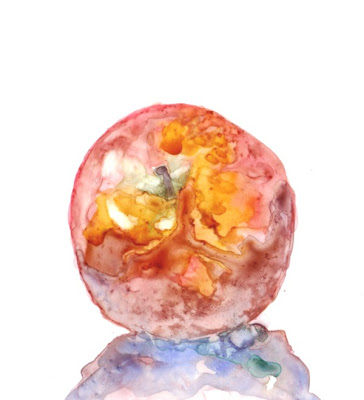 On my continuing exploration of apples, I dug around in my stash of supports and found a piece of translucent yupo. My next apple was going to be on a traditional watercolour support, but I thought I'd try the yupo and go really loose, as only yupo can do.

It was a bit of a struggle and some of the colours overmixed and became a bit muddy in places, but the general idea is there.

I'm of two minds with yupo. Part of me enjoys the experimentation aspect of it and how loose it makes you think and paint. Another part craves the detail and smooth blending that traditional watercolour paper would allow if worked dryer. I think that I will get another couple of pieces of yupo in my next order just for times when I want this strong impressionistic feel to a piece.

Any suggestions for the next apple in terms of support or medium?
9 comments: 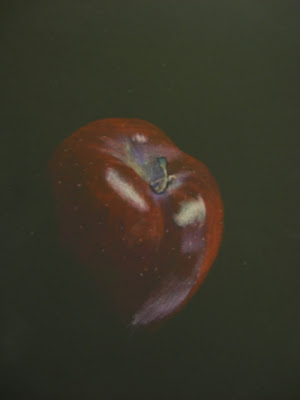 Are you sick of apples yet? I still have some apples left in me and I am quite enjoying cycling through different mediums and techniques to put them on the support that I choose.

Tonight it is coloured pencil on black paper 9 x 12. I haven't used cp for awhile and am not pleased with the highlights. They're not blended enough and need to be smoother and softer. But as the piece isn't intended for sale, I won't worry about it and move on to the next piece.

There are so many views of an apple that I can have, it's mindboggling. Sliced? Just the core? A bite taken out? Multiples? Singles? I seem to have concentrated on single pieces of fruit so far. I like doing that so I can really concentrate on the form and lighting. Piles of fruit are more timeconsuming and sometimes the initial enthusiasm for the piece starts to wear off and it progresses. I wanted these studies to allow me to really examine an apple and put it on paper or canvas.

Now which medium next? What support? Stay tuned to the apple challenge....
7 comments: 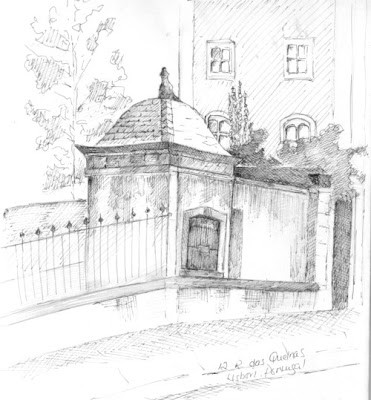 12 R. das Quelnas, Lisbon, Portugal
I'm slow on catching up with the rest of the world sometimes so have only recently discovered Google Street View and an opportunity to combine art into technology.

The Virtual Paintout is hosted by Bill Guffey and consists of choosing a city a month and letting people explore it, choose a view, paint or draw it then have it posted on the VP blog.

Its easy to get lost (literally and figuratively) in these cities. As you explore narrow streets, view local sculpture and scenic spots, its difficult to decide on a particular place as they all have appeal.

September's city is Lisbon, Portugal. After much exploring I came across this stone outbuilding in the older part of town and couldn't resist a pen and ink drawing of it to capture the feel in black and white. I felt that colour would bring it too far into the present day somehow.

Anyone over 40 from St. John's will be quite familiar with the White Fleet. Until the early 70's the Portuguese fishing fleet would leave Portugal for a season's voyage, or a campanha, to fish off the Grand Banks. The fleet was known as the White Fleet because all the ships were painted white. Many of the sailors in the fleet were fine musicians who brought their instruments ashore or played on the boats tied up in the harbour.

Portugal and Newfoundland have had strong ties for more than 400 years through the fishery. In the 1960's and early 70', the waterfront was lined five deep with the Portugese White Fleet and downtown St. John's became cosmopolitan with Portugese fisherman speaking a language few knew, their olive colouring a stark contrast to the sun starved inhabitants of this island.

...The launching of the new ship also marked the quincentennial celebration of the Portuguese presence in the waters off Newfoundland. There were celebratory masses. The St. John's film council organized a special film festival for the fishermen, with showings of the films "Portuguese Grand Bankers" and "Portuguese Golden Beaches," with announcements printed in both the Portuguese and English language. The festivities ended when a parade of 4,000 Portuguese fishermen marching to the Basilica of St. John the Baptist bearing a three-and-a-half foot high statue of Our Lady of Fatima, a gift of gratitude and friendship intended as a holy link between the two peoples. A statue of Gaspar Corte-Real also stands looking out to sea, in remembrance of the Corte-Real brothers' 1501 and 1502 exploration of these coastal waters, to which they ultimately lost their lives...

Pascoal & Filhosa fish company - in an emotional dockside delivery - took possession weeks ago of the Argus - one of the final four surviving members of the Portuguese White Fleet.

So 12 R. das Quelnas now has a place in my heart and I will be back there to see more and draw more, even if only from the comfort of my chair for now.
9 comments: 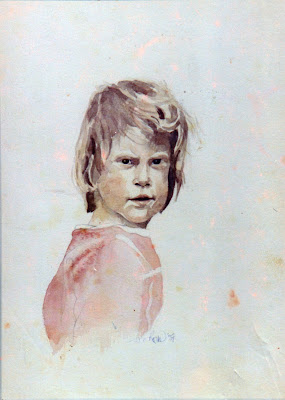 I seem to be constantly unearthing the past lately when I look for other totally unrelated things.

I found this photo of a watercolour sketch that I did in 1987 inside a book. 22 years ago! The photo is a little the worse for wear but I recall the image well. It is of my niece when she came to visit me in England many years ago. She was perhaps 2 or three then I think. Rather fitting as tomorrow is her birthday and she's back in England.

Its a shame the photo isn't better. The colours have faded a bit and aren't really representational of the original but the overall values are still there.

I don't know where the original of this is. I don't recall if I gave it my sister or not. I did another piece of her but in oils that my sister does have. I don't have an image of it though and must get one for my files. That was done around the same time also.

Its interesting to find old pieces and compare them with my current style. I don't know if styles do change a lot, even over time. Experimentation takes place with mediums and supports but style seems to stay with a person.

What do others think? Is this similar to my current style or have things changed in the past 22 years?
8 comments:

The 'end of the palette' painting 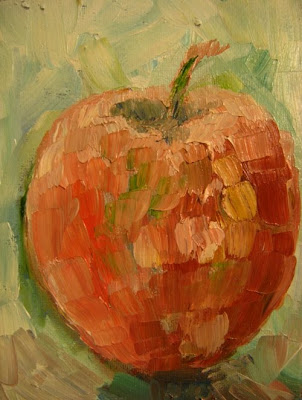 I'm usually not overly frugal but for some things I really hate waste. Paint left on my palette is one of those things.

After painting all weekend, I'm still left with an assortment of squiggles and blobs of half used/half dried paint in various colours left on my palette and I really don't want to just toss them. So I thought I'd just pile them onto an old piece of canvas board and let the colours land where they may and see if something recognizable came out of it. There are rich layers of impasto that make me almost want to dip a finger into them like icing on a cake. 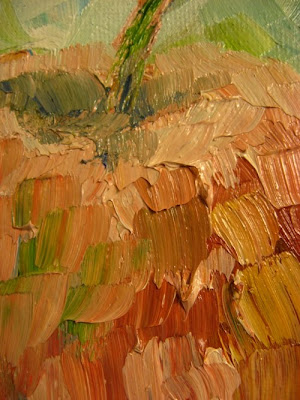 So now my leftover paint is used. My leftover canvas is full of paint. I have a new apple that looks rather like a patchwork quilt. I don't think it will ever make it in an exhibition but I thoroughly enjoyed creating it. 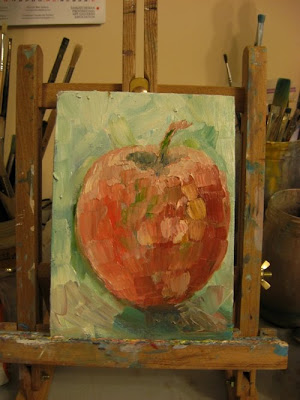 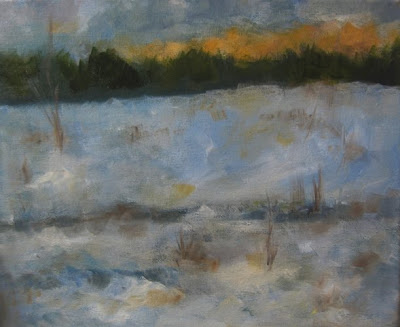 Twilight Marsh II
oils 9 x 12
Today is the first day of autumn and while I'm not quite ready to break out the wooly sweaters and mitts quite yet, I am contemplating starting some small knit projects that will keep out the cold.

The weather's too warm to wrap my head around that too much but it did cross my mind as I continue revitalizing old canvases. This winter scene is of a meadow that I pass each day on the way home. On this day, the sun lit the clouds outlining the trees in gold and the snow was purplish-blue in the fading light. Twilight. A perfect time of day.

I originally painted this back in January, mostly from memory.

I have been studying the paintings of Peter Fiore and his beautiful stark winter landscapes. Perhaps I was influenced by his work when I repainted this little strip of land. Its not winter yet, but with scenes like this that I know will appear again, it makes the season less formidable.
1 comment: 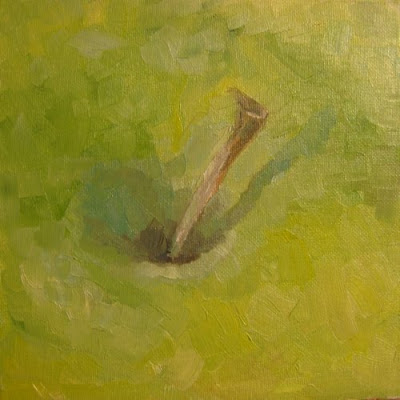 A single apple on its own deserved a companion so I tried another, this time in green.

Greens are always a challenge to me and I don't have more than a couple of tubes of green in my oils arsenal. Mixing blues and yellows help and in green apples there are also a lot of yellows and blues that stand on their own in the form of highlights and shadows.

This, sitting next to the red from yesterday, would make an interesting pair of complementary paintings with some symmetry in the stems to balance them.

This is also an 8 x 8 inch canvas panel in oils.
5 comments: 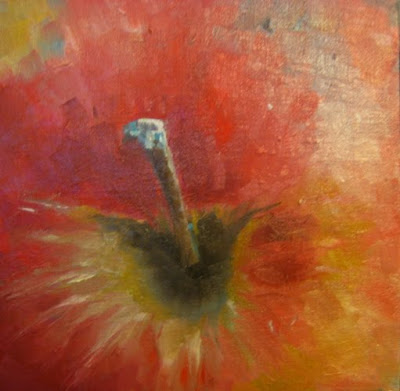 I still have the apple challenge in the back of my head and ideas are swirling around. This afternoon, I tried this quick one. Its a macro view of an apple that turns into an almost abstract this close up.