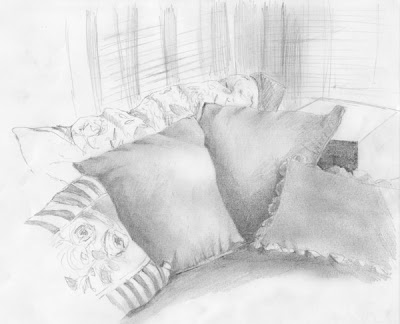 I've been lazy today and haven't ventured out, not even to the supermarket which is where I often end up on weekends. I'll tackle that another day. The north wind still blows so with the fireplace glowing, I tried my hand at something new - stone carving or etching.

In Newfoundland there is no shortage of rocks, slate, granite and my favourite, smooth, flat beach rocks. I went 'shopping' for my art materials in Middle Cove yesterday evening and came back with a bag full of all sizes, shapes and colours of stones. I have a rotary tool with diamond tip bits of various sizes, so I spent today getting a feel for what they can do. I'm impressed!

Its quite amazing that a little drill bit can cut into hard stone with relative ease. It's a messy business though with lots of dust everywhere. I'm still trying out bits and designs so will post something when (and if!) it works out.
6 comments: 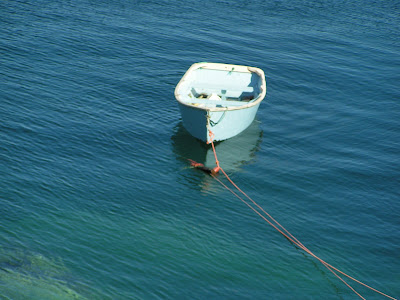 Teach People How to Treat You

I came across this article on Christine Kane's blog and it made such sense to me that I had to share it. Do take time and read in depth the headers from this article as well as wander through Christine's blog. She is an amazing writer, teacher and musician with a lot to say.

So, what does it mean?

Teach People How to Treat You: The Four Steps

2 - Learn from your Current Situation

3 - Honor It and Practice It 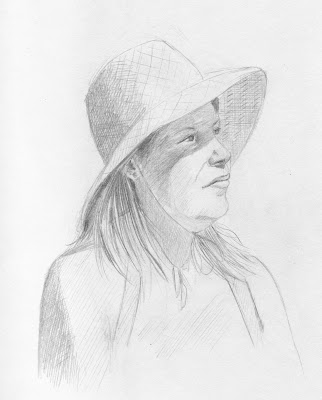 Some people see things as they are and say "Why."

I dream things that never were and say

I've bought new paper and have it stacked on my shelves in my cupboard and there it sits. I'm doing what I tell others not to do. I am savouring the fact that I do have a variety of paper - pretty much any type for any medium that I want to use. But I stick with my large and small sketch books. I think I'm waiting for a significant piece of work to pop into my head before I break out the 'good stuff'.

However tonight I will change that.

I have been caressing some of my stash of Sabretooth paper and am anxious to see how it performs. Then there is the Canal paper - handmade in delicious colours and textures. Then the buttery soft hand made vellum...and so on. See what I mean?

No I WILL break into a sheet of the newer paper and play with it. After all it is only paper isn't it? 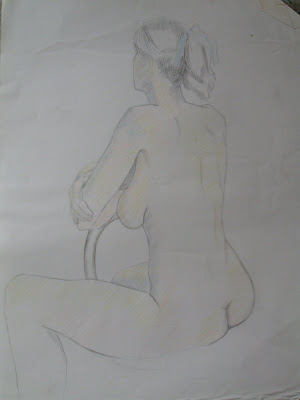 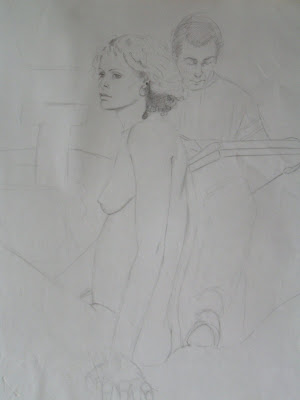 I've catalogued more old drawings - those from life classes in the early 80s in England. Its interesting to go back and see what was drawn, who, how, etc. I remember all the models well and became one myself, working on both sides of easel. It was an interesting experience, if not somewhat chilly at times. I'm still looking for a good life class locally that's held outside working hours.

We would start out with short poses, sometimes as brief as 20 or 30 seconds, moving on in length til the main pose was decided upon which would last an hour, then we would change again, either places or the model would change position.

The advantage of having been the model was that I could see if the person was getting tired of the position and needed a break or was simply bored out of their mind and needed more conversation.
1 comment: 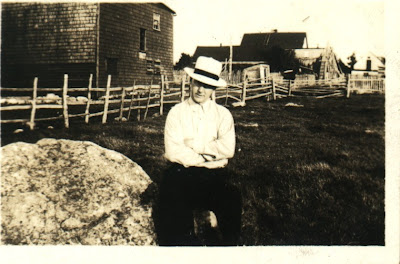 There have been television programs filled with information about the Battle of Vimy Ridge all weekend, competing with Easter, as the 90th anniversary of the battle is April 9th, Easter Monday. The battlefield and monument at Vimy Ridge National Historic Site commemorate Canada's significant accomplishment, contribution and sacrifice in the First World War, and particularly the valour of all Canadians who fought in the conflict. The monument is dedicated to the 60,000 Canadians who died in the war and records the names of those who died in France and have no known grave. By the time the war ended 66,573 Canadians had been killed and 138,166 wounded. This was a very heavy toll in relation to the country’s relatively small population.

The old footage of WWII scenes reminds me of my grandfather William Atwill Bastow. He was a veteran of the first world war and came back with his life but with severe emotional impact from the experience and would never talk about the war to anyone that I knew of. He and I had a very special bond and I seemed perpetually in his company as a small child, until his death in the early 60s.

War art consists of primarily paintings and drawing by "war artists", including some photography when it moves beyond documentary purpose. A great deal of war art has been produced throughout history in an effort to record great battles and military events. This was done by persons of some talent, usually officers, who witnessed the events, or by professional artists working in their studios.

In 1917, Sir Max Aitken, Lord Beaverbrook, was appointed to head the Canadian War Records and commissioned British and Canadian artists to paint Canadians at war. Maurice Cullen, David Milne, A.Y. Jackson, Frederick Varley, Arthur Lismer and Franz Johnson were amongst the artists selected (the last four being part of the Group of Seven, which formed in 1920 and revolutionized Canadian art).
No comments: 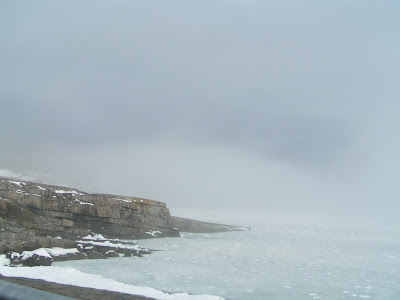 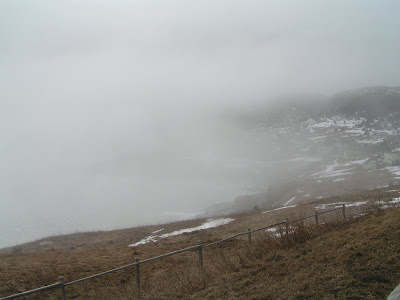 As you can see, it doesn't mean warm breezes, sunshine or flowers. It means fog, freezing rain and cold wind. Slob ice (small pieces of ice) had packed into Torbay and Flatrock on Thursday and while the wind drove them back out to sea by Friday, there was still enough there to chill he air and drape everything in low fog for the morning.

I went out intending to take some photos but this was about as far as I got photography wise as the batteries died. So I made friends with Tim Horton's and spent some time people watching and contemplating my next drawing.

I seem to spend a lot of time alone these days. Most of the time I don't mind my own company, but there are times when another soul to compare notes with or share coffee would be nice. 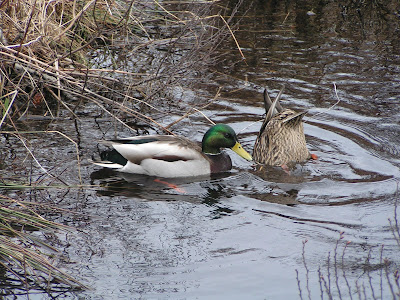 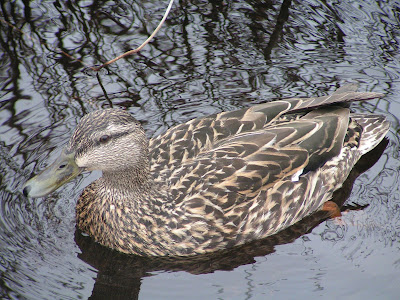 Friday afternoon brought several new visitors. This pair of wild ducks paddling in the open ditch by the side of the lane to the house were soon scared off by a mink that had be prowling the barn for the last week. Traps were set but it was a youngish mink and seemed to fill up on mice, not the bait in the traps. The mink was eying up the ducks from its vantage point on a rock. It was tracked and shot and the ducks returned to the water and even allowed some fairly close photos to be taken. There have been far too many mink around this year with 25 trapped or shot in the immediate area this year alone and far too many chickens and ducks killed by them.
2 comments: