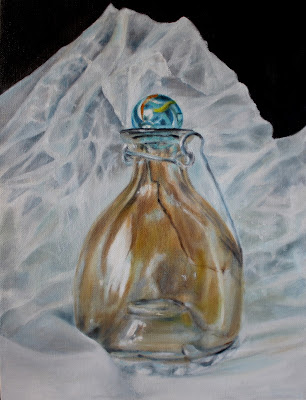 The Wasp Jar
9 x 12
oil
I've worked on layers and creases and values til I'm crosseyed with this piece.  Its more challenging than I originally anticipated.  Not the glass, that was the simple part. The waxed paper proved to be my undoing.  There are a mix of contrasts in this with glass, cloth and wax paper.  Trying to get them to become separate textures, yet a cohesive piece took some careful observation.  Its still not as I want it completely and I may fiddle with it a little more, but for now, I'm going to let it sit for awhile and work on other things.
5 comments:

A few things other than art have kept me busy this week, but I have managed to finish Dragon Gate. Its that horrible time of year for me when I go to work in the near dark and come home in darkness, so everything needs to be photographed under artificial light.  While my lighting is good now, it still doesn't compare to daylight I don't believe, so I'll take a couple of images tomorrow.

I have a few ideas going through my head for other pieces.   A had bought the last few canvas panels in this size (15 x 30) at an art supply store that was closing, and they had sat for in the studio for awhile until the jellyfish needed something that size, now this.  I think I have a couple of panels left, so there may be a mini series involving this technique of tissue and mixed media.

I seem to intersperse loose painting with tight controlled pieces.  I have no idea why I flip back and forth, but seem to be able to do so without problems.  There's something about each extreme that appeals to me.
3 comments:

Dragon Gate - a touch of gold 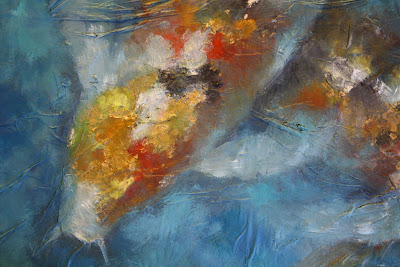 Dragon Gate  - WIP
15" x 30"
Mixed media
I haven't done a lot more with this as time's been at a premium over the last couple of days.  But I started adding a layer of gold and silver leaf in some areas of the fish where the light would catch it naturally.  I added the gold and silver, then added some more paint over most of it, as I want the effect to be very subtle. 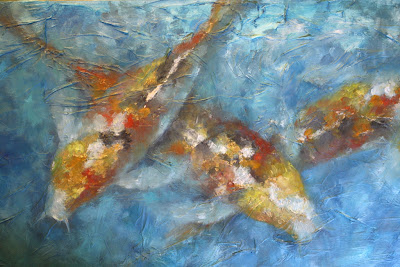 I'm still working on layers for the water and getting the colours and shapes of the fish to do what I want them to do.  Its getting there.  Tomorrow evening I should be able to dedicate a few hours to it and finish it up. 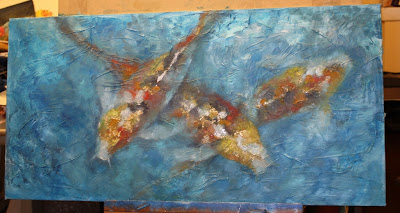 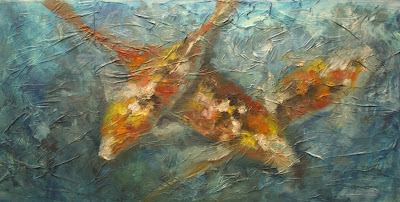 After completing the jellyfish painting in mixed media, I wanted to do a similar piece as I enjoyed the process of loose painting and using a variety of techniques and materials to create with.  According to Japanese legend, if a koi succeeded in climbing the falls at a point called Dragon Gate on the Yellow River it would be transformed into a dragon. Based on that legend, it became a symbol of worldly aspiration and advancement.

My initial concept was wind over water and how it moves the surface and distorts what is beneath.  Here, wind is more the norm than the oddity, so there was lots of past experience and visuals to go by.  I started with pasting tissue onto a 15" x 30" panel, allowing it to ripple and crumple at will.  I added gloss gel to hold to the surface and give some stiffness to the crumpled tissue. 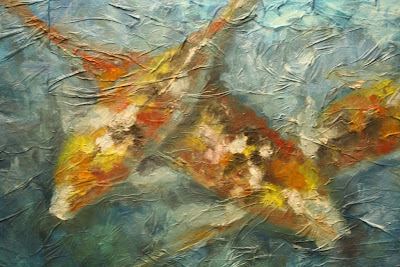 From there I simply added colour  in oils and started putting form into these koi fish.  There was no preconceived idea of what I wanted when I started, it just seemed to evolve until the 'aha' moment arrived and I knew where I was going with this.  I want the fish to be 'in' the water as opposed to floating on the surface, as can often be the case in some watery paintings, so am working on subduing some colours and allowing others to be brighter as they are closer to the surface and the light. 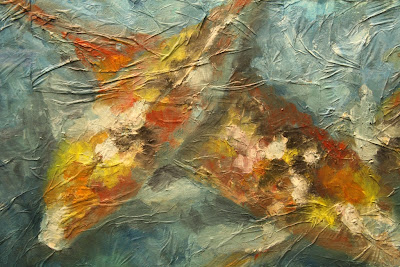 There's still more layers before I can call it complete, but its doing what I want it to at the moment.
8 comments: