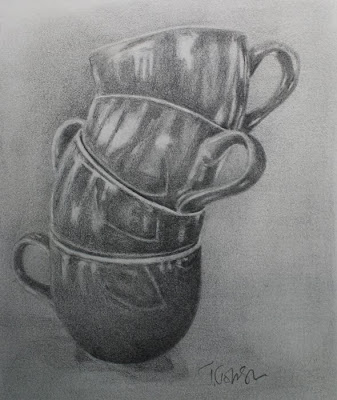 Every reflective surface appeals to the detail freak in me and ceramics are no different.  Its the play of light on hard surfaces that provides a challenge that I can't resist even if it defeats me now and then.

While I work on demo subjects for a drawing class I came across this photo of a pile of cups.  It was taken in a local breakfast/brunch restaurant called Cora's last month.  They'd run out of the mugs they usually use and provided cups, promising mugs would be substituted shortly.  Making room on the table for plates of food and keeping baby fingers out of grab reach, we piled the cups and, while the light wasn't the greatest, I took a quick photo of it.  I was going to take another, but the waitress grabbed them away to replace them.  I don't think she quite understood why I was taking a photo of the cups.  I've given up trying to explain the things I grab shots of anymore.  It just gets too complex.

So working out the tilt of cups and ellipes and reflections took some time, a lot of measuring and alignment, but I think the drawing is there now.  The paper is in a cheap sketchbook and I would have preferred a smoother surface to work on if I wanted the drawing to be a "keeper".  But isn't that always how it works out?   No doubt DaVinci had bits of paper scattered all over his studio too, wishing he'd started it on something else.

A few tweaks here and there and its back in the sketchbook.