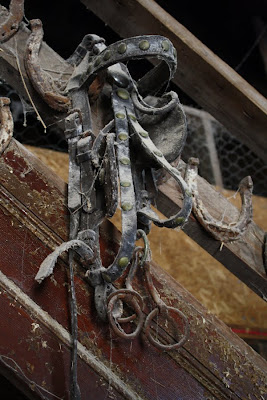 Horse tack
I've either been busy working or too sick to paint or draw, but things are finally moving in the right direction again.  I pulled out a canvas and some acrylics to start a painting.  I'm not sure if its going anywhere yet and am remembering quickly why I'm not so keen on acrylic paints.  I may get the bones of it down in acrylics then work in oils or it may just sit for awhile while I consider its fate.

It was a lovely sunny day and I walked around the property for awhile seeing what was springing to life and even that was tiring. This cold or flu or whatever I have really has taken its toll this week.  I found myself in the barn, talking to Lucky and B.D., the last two ducks living here now. They're a funny pair who seem permanently attached at the hip now  They were each left alone and are survivors in their own right. 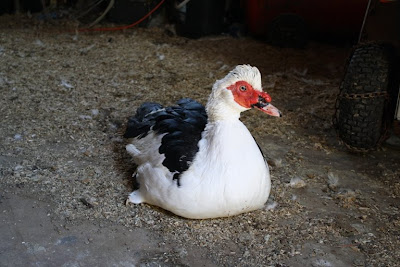 BD is the last Muscovy duck I have and is about nine years old.  His legs are arthritic and he doesn't move far, just venturing out of the barn to the grass outside and back again usually.  He's my favourite guy. 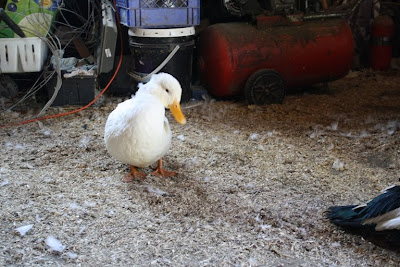 Lucky - named so after surviving attacks by mink and an owl - is the last of a batch of Pekin ducklings that were hatched here a couple of years ago.  In the mink attack, he was fairly badly injured and perhaps should have been put down.  His neck is twisted as a result of the attack likely tendon and muscle injury.  However, I tend to keep waifs and strays, so he remained.  He's happy and chatty and healthy other than his lopsided look at the world.

While in there I noticed an old bridle and bit and some ancient horse shoes hanging on the railings of the stairs leading to the loft.  Cobwebs and dust accumulated on them, showing their lack of use as I have no horses now.  That is a bit sad, but unless I have the time to devote to them, its just not possible.
1 comment: 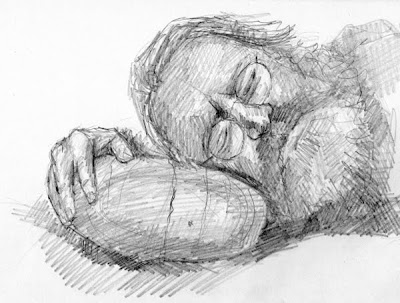 You never know what is around the corner and who you will meet or what will unfold.

The other day I accidentally came across someone on Facebook who I had not seen or spoken to in probably close to 35 years and it was a delight to connect again.

He is an artist - a musician of many talents and has continued that throughout his life.  I noticed a wonderful image that he had as an avatar as asked if I could use it for a painting.  He graciously agreed and I've played around with a quick value sketch for it.

The image has a magical feel to it.  The rocks, the land, the whiskers!  There is a story  behind it, as their is everything but for now, its better to let you tell your own story.

I have a couple of other portraits to complete before I can do any serious work on this piece and that may be good.  It gives my mind some time to think and plan.  The study, and there will likely be more or at least thumbnails, will let me work out my mistakes before I get down to business. Even now I can see where I made mistakes.  Must be the cold medicine. Or that's my story.
3 comments: 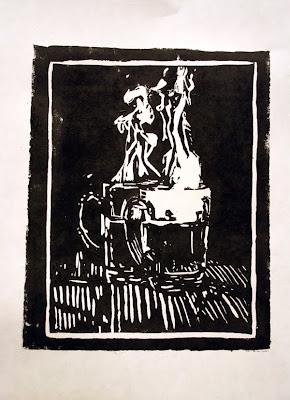 Hot Toddies
6 x 7.5 on 8 x 10
I haven't done much printing for awhile as an old injury to my finger became painful with the pressure to cut the harder lino blocks.  Warming the lino helps but cutting for half and hour or more leaves my hand sore.

I'd tucked away this piece when it was about half finished then hauled it out tonight.  I have a miserable cold and nothing was inspiring me.  I wanted something simple that didn't take a lot of thinking to work with so thought I'd try this one again.

I cut out the rest of the lines for it and tried a few prints on masa paper.  There are a few areas that aren't inked as well as they could be.  Then a few specks of cut lino sneaked in, but I got what I set out to do.  At least for tonight.  Now I'm off to find a real hot toddy!
5 comments: 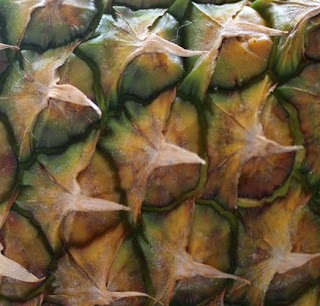 I have spent the last few days cocooned in meetings with little of me leftover in terms of energy or time for either creating art or talking about it through the blog.

I am back home now and with a day off tomorrow should have some time to catch up with myself again in terms of art before work engulfs me once more on Tuesday.

So until my thoughts regain consciousness, I'll leave you with an image that feeds the detail part of my artistic brain.  I love macro views of common objects that leave you wondering initially what on earth they are.   This pineapple made me look closer and see the shapes and colours of what appear to be perfectly wrapped little packages.  I can see a painting in this fruit's future...
1 comment: