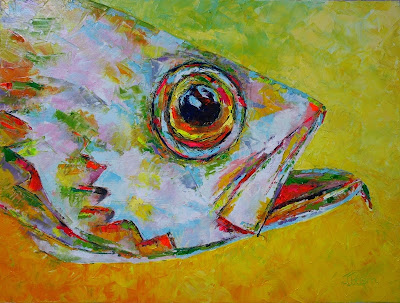 “Nothing in the world is permanent, and we’re foolish when we ask anything to last, but surely we’re still more foolish not to take delight in it while we have it.”
― W. Somerset Maugham


I pulled out an old painting that was started a few years ago and decided to revitalize it using a palette knife and some intense colours.  The colours I had, while quite saturated and intense, still didn't fit the vision in my head.  How to really make them stand out?  Fluorescent paint!

I ordered a few tubes of fluorescent oil paint from Kama Pigments and those colours...oh my, they are bright.  Of course, fluorescent paint is vivid in natural daylight which contains ultraviolet light but  under a black light the paint really become luminous.  I don't have a black light, but may get one just to understand the effect on the paint.

Unfortunately, fluorescent paint does tend to have lightfast issues.  Permanance of paint colour is rated on conditions that would represent approximately 20 years of gallery exposure.  The exact time of fading for fluorescent paint under home conditions I don't know.  But exposure to ultraviolet light can reduce the saturation of the colour, sometimes within an hour.

So why use a paint that is at risk of fading?  The colour. Nothing else has the intensity that fluorescent paints which highlight form and pull in the viewer and I love that those tropical colours and will experiment more with them soon.

The very impermanance of something can also be its appeal.
3 comments: 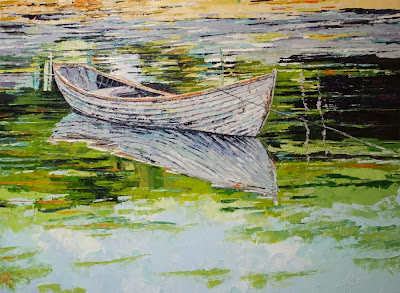 
I'm interested in the past and always feel a connection with what and who has gone before.

I've spent time reading about geneology and the connections to the UK on my mother's side of the family which stretch back to Dorset.  Not surprising, as so many of Newfoundland inhabitants have roots in either England or Ireland.  Going back into the 1600's was as far as I know and many of the towns in the south of England I knew from my time living there.  Some of the villages I wish I could explore more now that I know their names and the connection with relatives who came from there in the 16 and 1700s onward.

I had known little about my father's side until I started my own explorations which traced back to the 1600s again before coming to a stop - back to Germany.  The roots in Canada came direct from Germany with immigration in the 1700s.  So while surnames altered in spelling over time, the trace from then to current roots was in place and neighbouring towns, Fox Point and Hubbards Cove, about 30 minutes outside of Halifax where families stayed and established life became reality.

I visited the area, walked the shores and beaches and revelled in the fact that ancestors walked there before me.  And of course the water and boats pulled me in and this was one of my inspirations for this painting, which was painted thickly with a palette knife.  The texture for the dory and water seemed to work well for this piece.

The end of an era 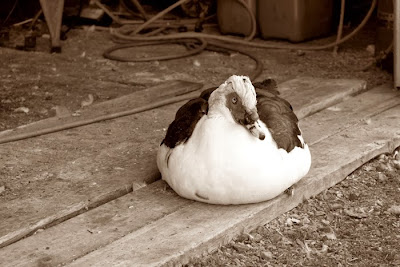 BD passed away suddenly on Saturday, probably taking him as much as me by surprise.  In the morning he was out in the garden, taking a bath, having treats, then in the afternoon, was found lying on the grass by the barn.

Just last week I took this photo of him, sitting in a pile of leaves in the garden. He was old, a bit arthritic, but loved slow explorations of the garden with Lucky, his Pekin friend.  He was the magnet in the farm yard for everyone who arrived, curious about who and what he was. 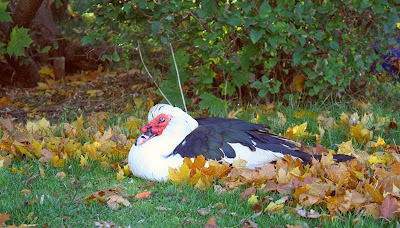 BD (short for Big Duck) was the leader of what was originally a small flock of nine Muscovy ducks that came to the farm in 2000.  He was bigger, stronger, pushier, but never mean.  Muscovies are large ducks, more the size of geese and quackless.  They hiss instead of quack and I will miss his greeting every night when I come home, crest up, tail wagging, hissing, more like a dog than a duck.  Lucky, his constant companion, will have to befriend the chickens more now and I am sure will miss BD. 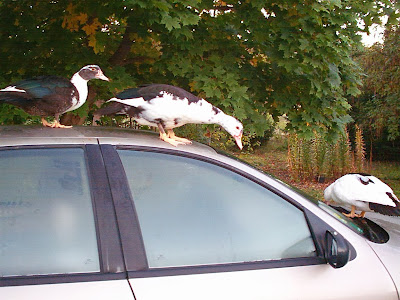 BD, on the far left, in his youth,overseeing the "girls" as they explored the car.  These ducks don't display the red facial characteristics until they're a year or two old. When they were young (under a year old) they had a habit of flying up onto cars, looking for interesting bugs to eat.    Not everyone thought it was amusing...

Perhaps its time for an updated portrait of him.  This was a small oil sketch done a few years ago.  I love that Elvis "hairdo" that he had. 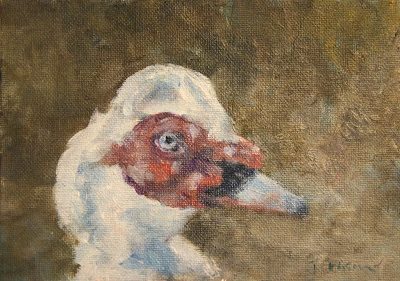