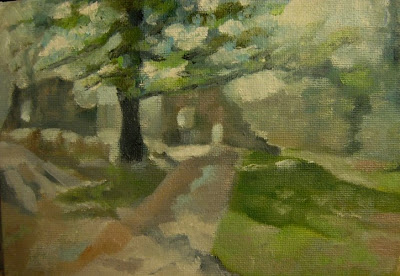 King had some quirks - one of them being ruins, which he created on the Estate. To give his property a more distinguished appearance, King collected stones to erect ruins scattered through the gardens. If you look carefully, you can even find the Coat of Arms of the original Parliament Buildings in Britain.

The Estate is said to be haunted possibly because King died there or because of King's own psychic activities. King had an avid interest in spiritualism and sometimes invited mediums to his Estate for private consultations.

I visited the Estate last year with a friend. It was a glorious day in early May and the Estate was beautiful. There was still the starkness of winter, just being overshadowed by the new green of spring. I took this photo looking up the path towards some of the ruins. The shadows and strong light appealed and also gave a sense of the quiet of the place, broken only by footsteps on the dirt path and birdsong above our heads.
5 comments:

The end of a legend 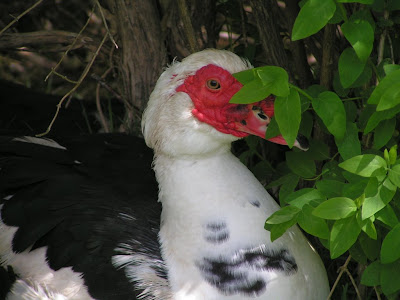 Buddy
2001 - 2009
Today Buddy died. He'd had a stroke or small heart attack about a month ago, but recovered. The last few days his face was a lot darker than usual, often indicating that his heart wasn't pumping as well as it could or carrying enough oxygen to his lungs. He was found with his very best friend B.D. standing next to him, looking confused and a little lost. 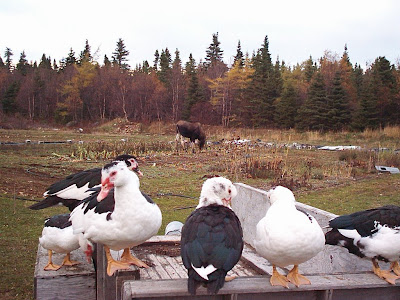 Buddy and B.D. (Big Duck) were Muscovy ducks and brothers. I had eight of the ducklings from that hatch, both male and female since they were about two weeks old. About a year later a coyote attacked the little flock and killed all the females and one of the larger males. That left me with just three. Buddy, B.D. and Chester. Three males together is not a good mix and their were lots of fights. So Chester went off to befriend a Toulouse goose while Buddy and B.D. remained on the farm. 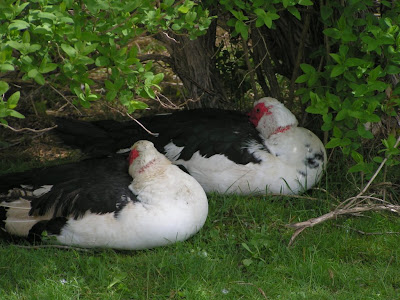 They were never apart for a moment. You never saw one without the other. They spent all their days together and their nights. They ate together, explored together, slept together and pretended to bathe together. Well Buddy got wet, but B.D. puts his head in the water and pretends he got completely wet. They're not strong swimmers and not dependent on water like many ducks. 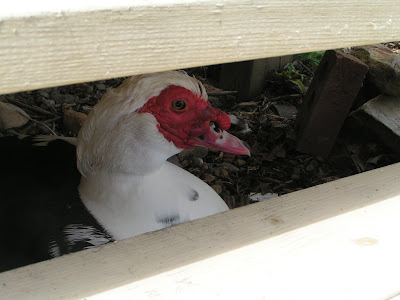 They are very large ducks, almost the size of geese but extraordinarily placid and laid back. They move slowly and lounge in the shade whenever possible. They are quackless and hiss which to someone who doesn't know them, sounds menacing, but in fact its their version of quacking. They come to greet me when I get home like dogs, hissing and wagging their tails and bobbing their heads with crests erect. They liked to hide under the steps to the house, hissing when people walked up. For people who didn't know them, it sure made them move fast to think of 'monsters' under the steps.

Its just a duck you say. No. Buddy was much more than a duck. I can't explain how or why, but he was very different, as is B.D. They were the characters of the farmyard. Everyone who came would comment on them and ask for them if they weren't in sight. 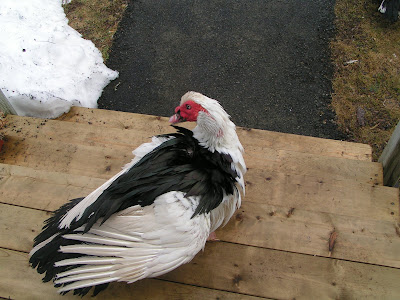 They would catch mice and eat them and in fact become anemic if they didn't get enough protein. That led me to an adventure in buying dead mice from a pet store one day when we didn't have any 'fresh' mice to feed them. 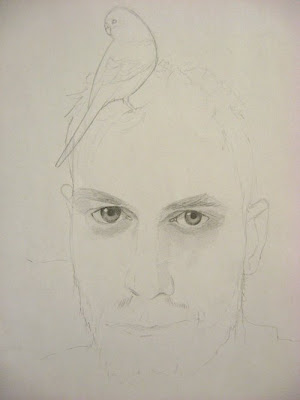 Call it drugs, too much sleep or whatever, but odd ideas come into my head for drawings and this is one of them.

I've been sketching, nothing concrete, technically competent or complete, but there's a part of me, even when sick, that still creates. I liked the intense gaze for this, complete with bird, adding a surreal - or real - element to it. The eyes aren't matched but that's what comes from drawing lying on the sofa! The drawing provides a jumping off point for other elements to join in, for things to change, colour to be added or subtracted and suddenly a new piece is formed. 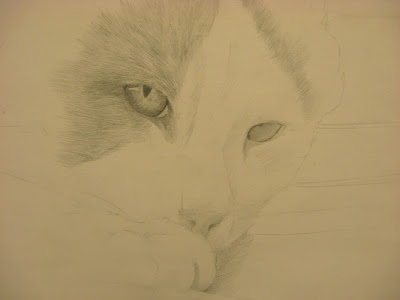 Another sketch was of Tripod, just a roughing in of eyes and fur shading, perhaps to turn into a detailed pencil drawing. The first drawing I ever did of Tripod sold at an art show and was awarded Best in Show. The judge of the show bought it in fact. Its time for another serious piece, despite the cat's disdain for me.

Creativity has been the subject of debate and many beginning artists don't understand it well or confuse it with technical ability, believing creativity will win out in the end. That's a rather romantic notion, but never rings true in the final product. To successfully create a creative piece you need to have the technical ability to apply a medium to a surface, no matter how your change your final subject or composition.

I've also been working off and on on the oil painting of my daughter as a child. Its slow going and I have wiped and rewiped elements of it several times. Perhaps the turps are getting to me. I want it loose and free, but what's coming out is tight and controlled. Even a happy split between the two would do about now. And for some reason the camera won't oblige to provide an update tonight. It probably needs its feed of new batteries.
4 comments: 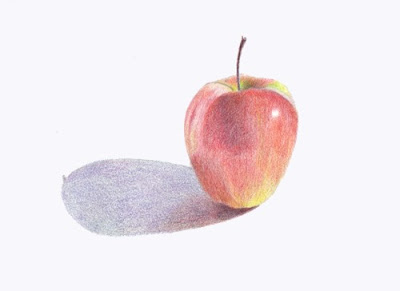 Is supposed to keep the doctor away, but I'm not sure in this case.

This cold/flu whatever it is has really knocked me out so I'm taking a couple of days away from the blog to recover. My befuddled brain doesn't make a lot of sense in terms of drawing or painting, but should be back before long, raring to go again.
10 comments: