Guardian of the eggs 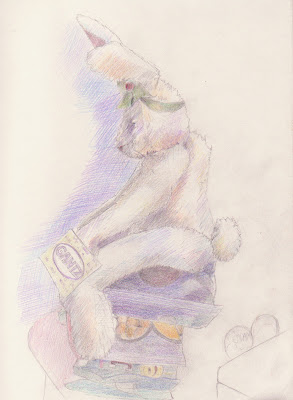 I bought this rabbit for my grand daughter, along with some chocolate eggs for the older members of the family. They were all perched on the edge of the table and the rabbit looked so like a guardian of the eggs that it begged to be drawn. So here is the result. It may serve as representation for one of the alphabet letters in the little book I'm preparing for my grand daughter. Sometimes the idea is before me and I don't have to search for it. I find that if I have to search, the end result is not usually pleasing. So found treasures will make up the contents. 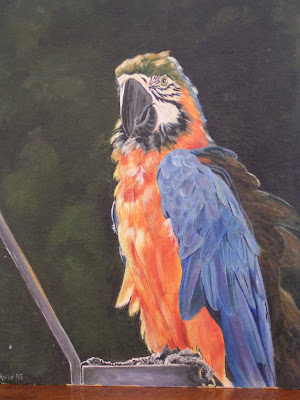 This is only of my early paintings, done about 2o years ago in acrylic on canvas board, about 16 x 20. Its one of those paintings that has travelled continents with me, and keeps turning up when I sift through old drawings and boxes of half finished paintings that I discarded years ago in the hopes that 'one day' I would find time or inspiration to continue on with them.

This was pretty much finished. Looking at it now, I can see how much more work needs to be done ont he feathers, especially on the right side.

The painting reminds me of a friend who died after the painting was complete. Don had developed lymph node cancer and the painting became part of his ritual. In the week following chemotherapy, when he felt sick and depressed, he would come to my house and sit in the kitchen drinking tea and eating digestive biscuits and watch me paint this bird. Each day that he came he would sit back and say ' Man, that's a great bird.' We talked little some days and a lot on other days. I learned more about him than I ever knew in superficial conversations in a pub with others around. I knew his fears, his deepest fears about cancer, life, death, people, but the conversations were never depressing. Sometimes sad, but we always managed to laugh at some point during his visit.

The macaw remained at this point of completion and was put in the pile of drawings and paintings accumulating in a spare room or behind the sofa. Don had a brief remission after completing the first sessions of chemotherapy but a year later, the cancer returned. He came back to my house again to talk and to watch me paint, more to talk as my back would be turned to him as I painted and it made an easy sounding board. I was there, but I wasn't. I was the listener. He told me he would not have chemotherapy again, it was too hard on his body and mind. Having seen the ravages, I agreed with him. Weeks later he went into a hospice and died there.

The painting, complete or not will stay with me as a reminder of Don and of those talks.
No comments: 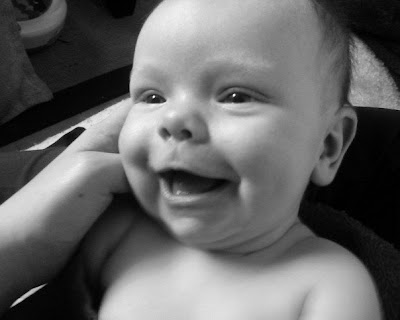 The smile that flickers on baby's lips when he sleeps--does anybody know where it was born? Yes, there is a rumor that a young pale beam of a crescent moon touched the edge of a vanishing autumn cloud, and there the smile was first born in the dream of a dew-washed morning.
Author: Sir Rabindranath Tagore
Here is my grand daughter who was two months old yesterday. I do like this photo of her with a genuine smile, not one created by gas. It has potential for an interesting portrait.
6 comments: 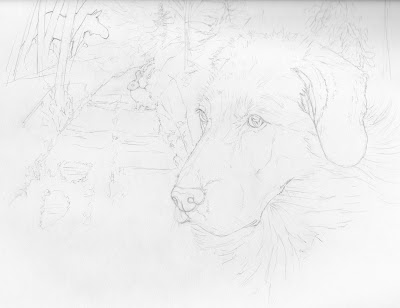 Without art, the crudeness of reality
would make the world unbearable.
George Bernard Shaw

This is the original line drawing for a new image that I'm starting of my old dog in his favourite habitat - the woods. There is more detail added in the transferred drawing, with a remarque on the bottom of the drawing. You'll have to wait impatiently to see that section...

The path leads into the woods and is a rough road going from the bottom of my driveway off for miles leading to trees, ponds, trees, meadows and more trees. Its full of rabbits and squirrels and moose along with other creatures that I don't even want to think of like coyotes and bears.

I want to create a detailed, realistic drawing of the dog within a background. I have been lazy about using backgrounds and they do add a lot to a drawing or painting. I like the simplicity of working on a single item so have steered clear of landscapes. By breaking the background down into smaller sections, it becomes more manageable. I'm impatient to get to the drawing of the dog, but like leaving the cherry til last, I will make myself finish the background first before I start on him.
7 comments:

I've started the layout of a new drawing of my dog, Biscuit, who died a year or so ago at 16. The drawing will be in graphite, detailed and include some of his favourite things - the woods, rabbits and moose.

In researching references for this drawing, I looked through lots of old photos of the dog and other elements of the image. While doing so, I came across a little video that I made of him while he was asleep on the sofa one afternoon, dreaming. Unfortunately, I missed the livelier parts of his dream, so its not too exciting a clip. Its also a bit of an experiment as its the first time I've tried uploading a video onto YouTube, which seemed to be fairly straightforward. There are a lot of possibilities with this technology, especially in teaching art, so I'll be experimenting more and perhaps subjecting you all to my efforts.