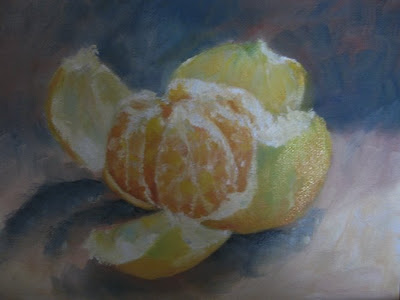 Clementine
9 x 12 oils
I took a photo of this clementine months ago while it sat on the kitchen counter awaiting its fate. I liked the colours and shapes and knew it was destined for a drawing or painting in the future.

The future came in the form of the Virtual Sketch Date this month. I chose this image and hope people will enjoy drawing or painting it as much as I did.
33 comments: 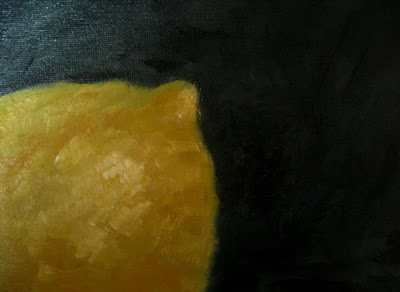 Lemon III - Fruit Series
Oils 5 x 7
I started a series of very simplistic fruit paintings to get myself back into the swing of oils. I don't know if its worked, but I've enjoyed the process and it helps to not have to worry about complex shapes and values in these cropped images. The image unfortunately still has a glare to it as its wet and its at night. Better luck with an image tomorrow I hope.

The other fruits in the series so far can be found here and here.

Also, just a reminder that the January reference for the Virtual Sketch Date is online now. I have provided the image for this month and encourage you to try it in whatever medium you enjoy. The reference can be found on the VSD blog here.
4 comments: 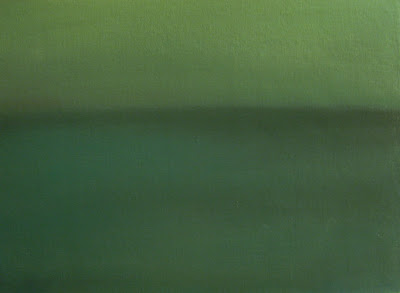 It sits looking
over harbor and city
on silent haunches
and then moves on.

There is a subtle change in the light. You strain to see the separation of sea and sky and realize that there isn't any. The fog bank is resting on the horizon, almost resembling land at times. The mirage of the sea, not the desert.

The foggiest place in the world is the Grand Banks off the island of Newfoundland. Fog is frequent there as the Grand Banks is the meeting place of the cold Labrador Current from the north and the much warmer Gulf Stream from the south. The foggiest land areas in the world are Point Reyes, California, and Argentia, Newfoundland and Labrador, both with over 200 foggy days a year.
6 comments: 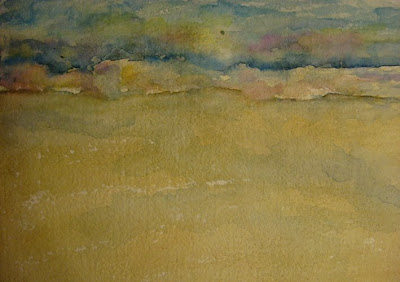 Confetti Tide
5 x 10 watercolour
I've been studying waves and the ocean's movement in watercolour, trying to figure out how to capture the motion in a freeze frame of the eye. Its a lot harder than imagined. Both in concept and in the medium as well.

This wave breaking on a smooth shore reflected colours of the sky and the shore and the cliffs sourrounding it and reminded me of confetti. There aren't a lot of sandy beaches in Newfoundland but the ones that exist are beautiful and stretch on for what seems like miles, becoming treasured places that people are loathe to share with the world in case they become overcrowded.

Of course here, there isn't the commercialism associated with beaches in other parts of the world. You won't usually find a plethora of buckets and spades and inflatables or t-shirts that you have to pass on your way to the shore. More often than not, you simply come upon the beach almost by accident, announced by a small sign and a few cars.
7 comments: 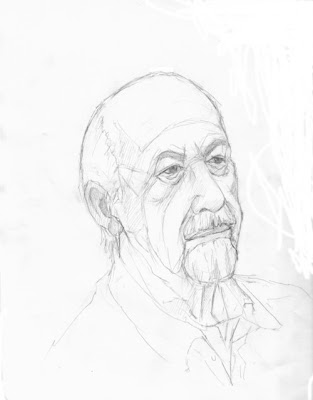 I went to what should have been a life drawing class tonight, but the model didn't show, so we took turns drawing each other. Here are the results from three half hour poses. I felt like I was just warming up when it was time to go again.

I love drawing from life and wish I could do it more often. Its so different than using a photographic reference. A couple of the sketches had me itching to paint them instead. Perhaps I'll bring some colour to the next session. 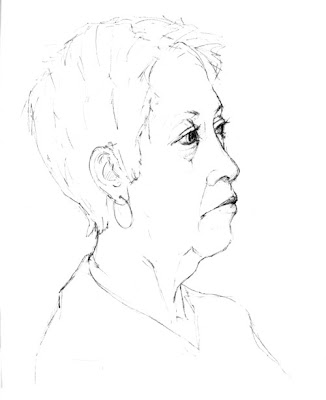 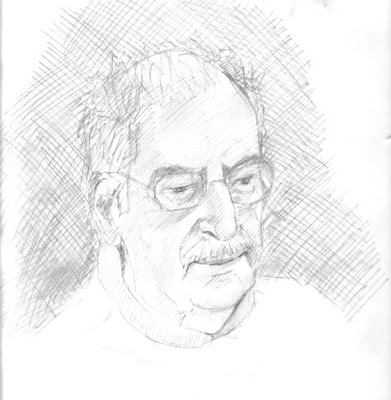 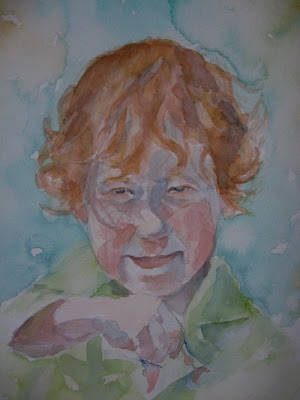 Shannon
9 x 12 watercolour
I've spent today piddling around, finishing up leftover pieces and making starts on other pieces. I was calling this portrait done but have now noticed that the left shoulder needs extending to make the arm look correct. Funny how I don't see these things sometimes til they are online. 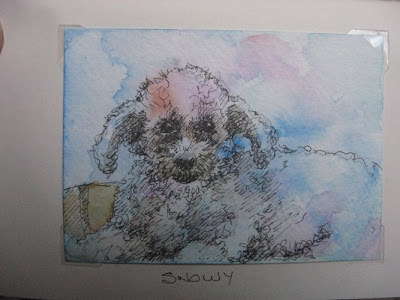 I had previously invited people to send me images of people or animals to include in my sketchbook for a project that I'm participating in. Robyn of Have Dogs, Will Travel sent me an image of Snowy, a sweet little dog that may not get as much of a look in in the blogging world possibly because Dermott has power in size. However, Snowy, here's your chance to shine. Your own page in my little sketchbook. Dermott, Snowy can negotiate on my behalf if you'd like to be included as well. It may involve food and sleeping rights next to the heater... 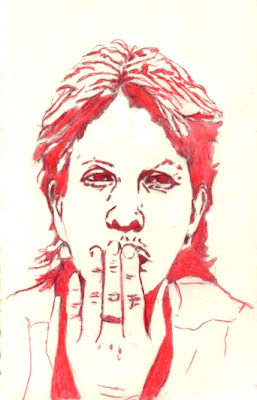 Finally another sketch inspired by lino prints and the strong graphic look they achieve. I wanted to see if I could recreate something similar in coloured pencil using again my most available and cooperative model. Me. Why red? Why not?
13 comments: