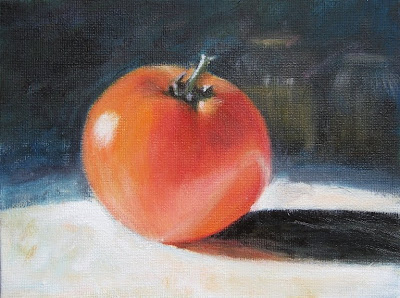 Single, red, female
Acrylic on canvas,8 x 10
copyright Jeanette Jobson
I spent about an hour this morning finishing this painting that was the demonstration for a class. Overall I rather like it now, but as always I can see things in it that I could change. I won't tinker anymore otherwise I'll just turn it into a muddy mess.

I played around with some more small studies today as I've run out of decent size canvases and need to stock up again. I have a handful of small canvas panels that I can use but some are just too small - around 3 x 5 - but they're good for practice. I haven't used acrylics for quite a while. They are convenient in terms of clean up and I really don't think many people could ever tell the difference between acrylic and oil paint in the final picture. However, there are devotees of both acrylics and oils and everything in between.

Personally, I prefer oils. I love the smell of the paints and turps and oils. It must be something to do with my love of history and the feeling that I am continuing a tradition when using oil paints. Yes, there are more challenges working with oils and waiting for them to dry between layers. I enjoy the ability to mix the paint more easily on the canvas with oils. I can do this with acrylics, but they are fast drying and can cause problems, especially in the warmer months.

There must be something about summer that makes me want more colour in my artwork, while in winter I seem to stick with graphite much more. Dry media will always be my comfort zone even if I slide over into painting now and then. I think it is the same for many artists who try their hand at a variety of mediums depending on mood, season and level of comfort.

Do the seasons affect how you crave colour or influence what you draw or paint?
5 comments: 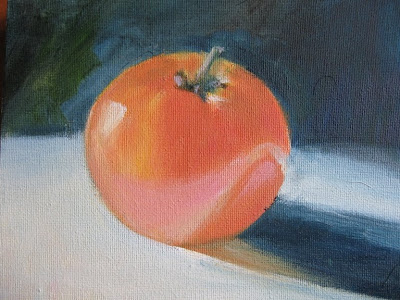 Single tomato study II
Acrylic 8 x 10 canvas
copyright Jeanette Jobson
Last night I taught a class and was asked if I could do a demonstration of a painting in acrylic. Oh yeah, no pressure....

So I chose the little tomato that I was going to paint anyway and gave it a shot. This is about an hour's work done between painting and talking about what I was doing. I really find it difficult to do the creative aspect and provide a running commentary at the same time. I start out painting, explaining why I'm choosing a colour or how I'm applying it to the canvas, then I find myself trailing off as the painting side of me takes over. I'm left with expectant faces, waiting for the next step and I have to jolt myself back into verbal mode again.

Does this ever become easy to do or is it always a challenge to function with both left and right sides, switching constantly?

I will go back and finish the painting, as there are a number of problems with it. The tomato itself is too perfectly round, the highlight colour isn't right and the shadow is sloping off downhill. I'll tweak the colours and background a bit. I really need to do more painting to be proficient at putting all the information down in an hour or less. I'm always amazed at those who can produce wonderful images so quickly with paints.
5 comments: 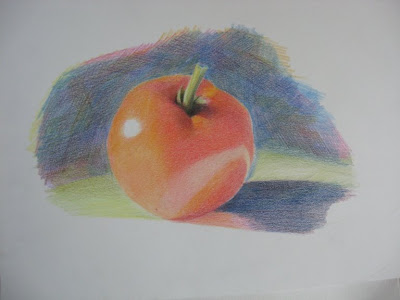 Single tomato study
9 x 12 coloured pencil on bristol smooth
copyright Jeanette Jobson
Although my love of art is in graphite and drawing, sometimes I do crave colour too and this fit the bill nicely. I always enjoy drawing tomatoes. That hot colour against a complementary one, the blues in the background, works well.

I was thinking about complementary colours and just why they are pleasing to the eye and how the eye sees them. Its a complex process, explained nicely in Wikipedia.

I also found a little video called Crazy Colors that provides an interesting visual experiment about complementary colours. Try it and see what your eyes pick up.
4 comments: 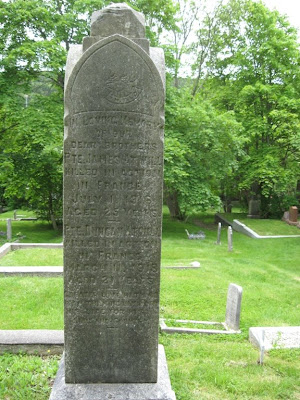 "It was a magnificent display of trained and disciplined valour, and its assault only failed of success because dead men can advance no further." — Major-General Sir Beauvoir de Lisle, Commander of the British 29th Division, on the 1st Newfoundland Regiment at Beaumont-Hamel

July 1st is Canada Day where the country celebrates its birthday. In Newfoundland, while we are part of Canada since 1949, another day is remembered - Memorial Day. On July 1, 1916, the first day of the Battle of the Somme in World War I, 801 soldiers of the 1st Newfoundland Regiment rose from the British trenches and went into battle at Beaumont-Hamel, nine kilometers north of Albert in France. After only 30 minutes the regiment was devastated. Only 68 men stood to answer the regimental roll call the next morning. 255 were dead, 386 were wounded, and 91 were listed as missing in action and presumed dead. Every officer who had gone over the top was either wounded or dead.

While researching relatives in an old cemetery I found a gravesite which brought home more the meaning of Memorial Day. The graves of two young men, relatives through my mother's paternal side of the family, James Atwill, who died on July 1, 1916 as part of the Newfoundland Regiment and his brother Duncan, who died two years later in action in France. James was 25 and Duncan 21. Such a waste of life and such a terrible war, as all wars are.

I started drawing a heliconia - a cousin of the bird of paradise flower. These are ornate showy bracts that hang down and are very tropical. Its a good exercise in negative space for me with all the background foliage and stems. The complexity of the background isn't as daunting as it seems as it gives me a degree of 'artistic license' in terms of leaf shape and depth of field. Just getting the values correct to provide the illusion will be the challenge.
4 comments: 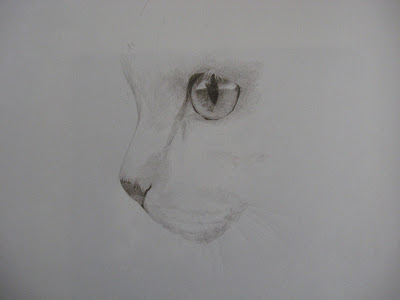 I've been doodling off and on this weekend and as its a 4 day weekend for me, I feel a little guilty that I haven't made inroads into the drawing projects that I intended to. I played around with a sepia coloured pencil and this white cat that has potential but isn't too special at this stage. I do love drawing eyes. I think I need to try a whole page of them just to get them out of my system for awhile!

I did however start a more complex drawing of a lovely tropical plant that involved a lot of detailed drawing and use of negative space. I love the challenge of drawing complex subjects freehand. I rarely use grids anymore and rely on my eye/hand to put me in the right place. Most of the time it works. I truly enjoy the process of drawing and seeing it develop under my hand.
5 comments: 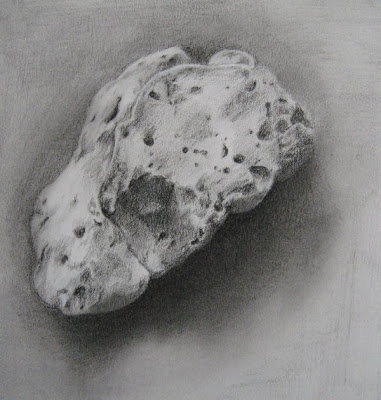 Rock I
Carbon pencil on Canson paper
copyright Jeanette Jobson
There is something satisfying to me about drawing rocks. Living on a rock in the ocean may have something to do with that as I'm surrounded by rocks.

I liked the porous texture of this rock. I often see these on the beach. They are part coral, part rock that have married into a new form. I love the intricate shapes that the new form creates and the challenge of developing subtle shading to portray those nooks and crannies within the piece. Lava rock is also very similar to the coral rock that I find, but formed by molten rock and gas bubbles, making it lighter than most rocks.

I haven't done much work with carbon pencils as I can never find them here, so this was an experiment. Its similar in feel to charcoal but has a 'lighter' feel to it and seems to go on more smoothly. I like the rich darks it can achieve along with the more delicate shading of the B grade pencil.
4 comments: