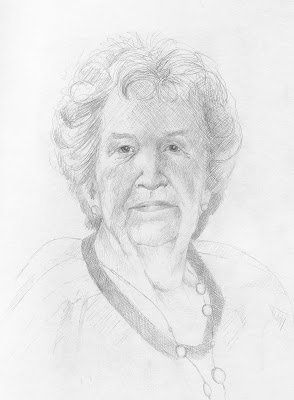 Joan
Graphite 11 x 14
copyright Jeanette Jobson
I did a sketch of my mother today. Its very difficult to do drawings of her as she is rarely content with the final outcome, denying her age. Photographing her is even more difficult as she doesn't want her photo taken either. So working with several reference images,none of which were good, and life, I came up with this after about an hour's work.

And no, I didn't get to my large size today. Life got in the way.
2 comments: 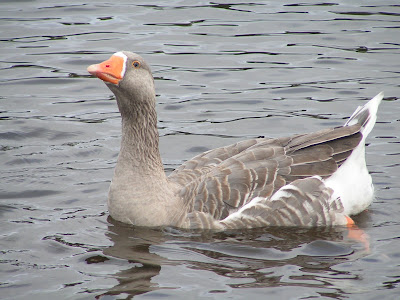 I get into sketching mode or small drawings and its so hard to get out of that and into larger sizes and colour. This weekend I will make myself do it.

Oils, pastels, watercolour the medium doesn't matter as long as its colour and as long as its larger than my current security blanket sized page.
4 comments: 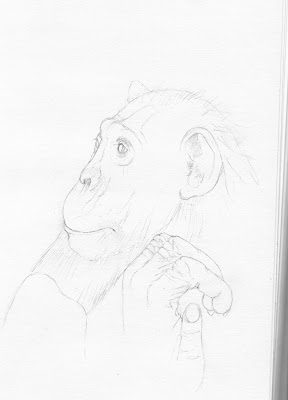 I'm toying with the idea of drawing another ape on drafting film and can't decide if it should be a chimpanzee or a gorilla. Both are quite interesting, but finding just the right reference is a challenge. I loved the hand especially on this chimp. The finger shapes and folds of skin made it fascinating to sketch.

I also looked in vain at the Anna Templeton Centre for a life or figure class in St. John's today. There were no life classes and the one figure class only had one registrant so the centre cancelled it. They say they'll call me in the fall as spring/summer isn't a good time, but they seem to be starting up knitting classes then - go figure. Seems to me that any time of year is a good time to draw...The only life class I know of is held on Thursday mornings and as I work, that's no good to me.

It seems I'm back to plan B, which is trying to start a figure class myself. I'll have to look into it after a little trip to Quebec next week. Gerry Squires is holding a life drawing/painting course at Memorial University over two weekends that I would love to attend. But the first weekend is one that I will be out of the province. Sigh. Back to plan 'B'.
2 comments:

Life on both sides 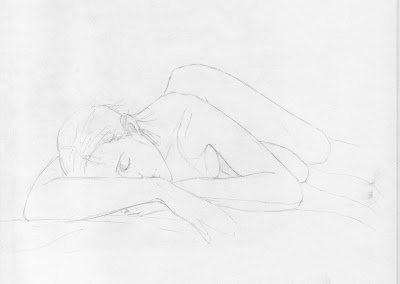 I do need to find a life class again. Its been ages since I have done live drawings of the human figure. The problem is finding one that is held in the evening or on weekends. Everything seems to take place during the day. Maybe I'll just have to run one myself.

I find there are enormous differences between public acceptance of the nude form on both sides of the Atlantic. Europe, for the most part, is very liberal and nudity is part of life and accepted. In North America however, nudity is still seen as representing sex with constant embarrassed jokes and innuendoes when the subject of life classes comes up. I never quite understand that, especially as most North American television is obsessed with bodily functions. Which would I rather see? A bare breast or some air brain float around singing about how easy it is to insert tampons? Hmmmmm, no contest there. But show any frontal nudity on North American television and the country is up in arms over it. Bodily functions seem to be another matter altogether it seems.

Europeans have used nudity and sex in television commercials for years without outcry from the public. Why? Because it is normal. Its natural. Have a look at some of these commercials. These are the much tamer commercials by the way. I don't want the Bible-belters arriving on my doorstep to save my soul...

And lighten up North America.

Here is a sample from IKEA. Need a new bed?

My all time favourite. Time for the kids to leave home? IKEA again.

Or perhaps a Motorola pager?

Then there's a Panasonic ad. Nothing like this in North America.
5 comments: 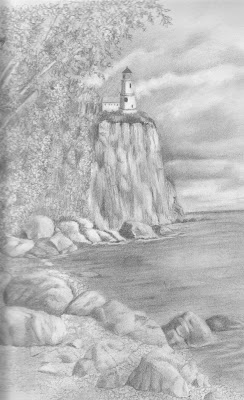 I started this as a quick sketch that seemed to expand bit by bit. I'm no landscape person. I do them when I have to but usually try to avoid them where possible. Its all that detail that worries me and at some point they get abandoned in favour of something that contains people or animals in many cases.

The photo of this drawing didn't turn out well. The light was fading and its never a good time to try for an image. I will try again in the morning for a better image. The feeling I get from this drawing is rather bleak. It looks so remote and forboding - perhaps the sky or overall grey tones. I'm sure in watercolour or oil it would look entirely different and much more cheerful. 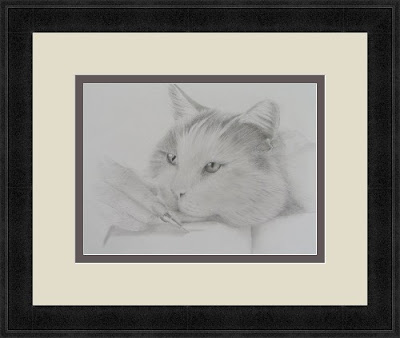 The Artist's Cat
Graphite, 9 x 12, Bristol Smooth
Copyright Jeanette Jobson 2007
Of the four pieces that I put into the Art Association's Spring Exhibition, just one sold and not the one that I expected. I had the House Mouse in the show for a very reasonable price and expected it to go, but I still have it. Everyone loved the mouse but didn't buy it. Instead the image of Tripod sold. That's just fine with me, but I did rather like that drawing and its always with a little regret that I part company with a piece of art. Its like saying goodbye to a friend.

There was a range of art at the exhibition, with most pieces being done in acrylic and a lot of traditional Newfoundland scenes. It was interesting to see others work and talk to other artists. I look forward to contributing more and taking part in the Art Association. Its been too long since I was involved in an organization like this. My workplan for 2007 is slowly coming together in terms of art. Perhaps in June I'll do a check on my wish list and see where I stand and how much I have or have not accomplished. It should be interesting to track it.
2 comments: