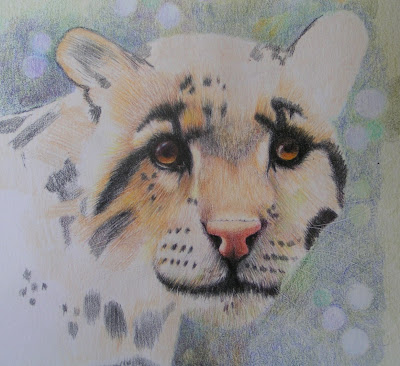 Today I was asked to help with some floral arrangements for a wedding in a small rural town about an hour's drive from where I live. The flowers were cut early this morning then loaded into the car along with every possible thing that might not be available and we drove to the site. It was unique in some ways and very predictable in others. 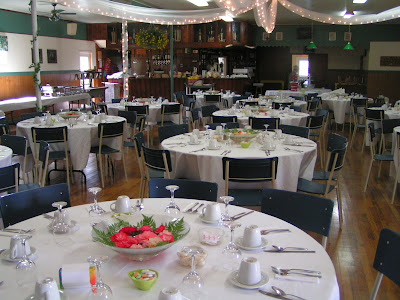 The building was multifunctional, with the front section a fast food restaurant and the rear a function room with deck attached overlooking the gravel car parking lot with a glimpse of the sea on the other side. Not exactly picturesque, but like many Newfoundland weddings, once the guests have had a few drinks, no one will notice or care where they are. Guests wouldn't miss the building, just look for the large plywood cutout of a whale, painted (badly) grey. 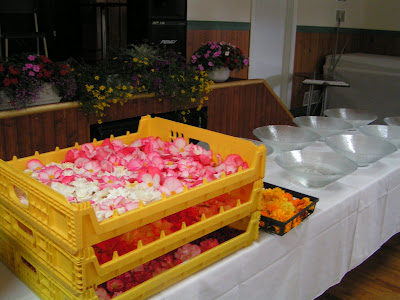 The car was unloaded and a set up point found. The waft of fish and chips mingled with hamburgers floated in from the fast food section at the front, as the door was left open due to the heat of the day. Sixteen tables for six were set and they looked lovely, all white china and glass with sugared almonds festooning the table. The plastic container for the sugar rather spoiled the effect, but hopefully will be overlooked.

The staff in the place were interesting. It seems you have to have a loud voice and a rough manner to work in this place and take lots of smoke breaks. I worry about the bartender who trailed his oxygen tubes (seriously) behind him as he either talked with other staff, unabashedly stared at parts of me or set up the most god-awful disco music from mp3s on the computer which he played at a deafingly loud level. He'd then grin and wink and say 'That will get 'em up on the floor, won't it?' I mentally thought 'that will make them vomit...' but gave him a polite smile and got on with the job in hand. This place, combined with staff has the makings of a remake of Trailer Park Boys.

I managed a little more work on the leopard early this morning and tonight. Its coming together but has a lot of work yet to reach the depth of values that I want.
3 comments: 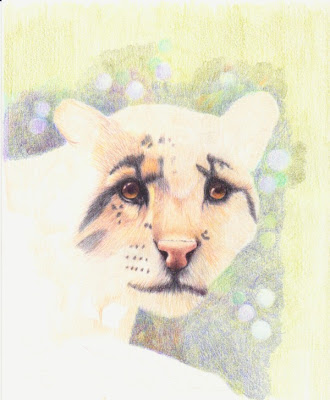 I had a couple of Ann Kullberg's CP kits sent to me and started on one last night and tonight. I love the eyes of this animal, even though it looks so worried! I'm just starting to build the fur and amworking on the background at the same time. I need a couple more colours that I thought I had, so it looks like a trip to the art store tomorrow. Oh what hardship... 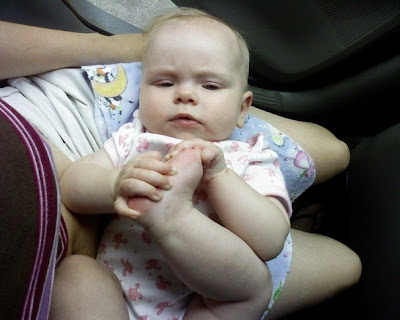 My youngest daughter and grand daughter will be visiting in early October for a couple of weeks. It will be a novelty to have a young baby around again and will test my ability to remember all that is required for them. I'll need a crib, a car seat and a high chair for starters. Yikes! I'd better start soliciting people I know who have young children to see if I can borrow some things for a couple of weeks.
2 comments: 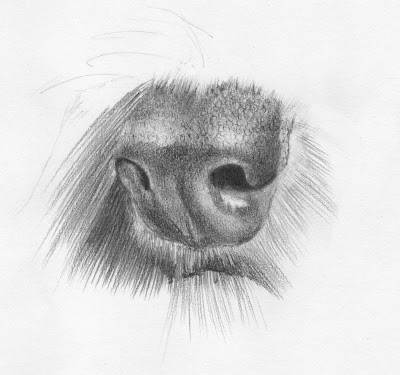 Dog's nose are fascinating to me. They are all sizes, shapes and colour. I love the rubbery look and restaurant utility flooring texture. Its also great fun to draw them such as this study. I haven't created the best, shiniest, wettest dog nose, but I bet it's cold.

A Dog's Nose is also a drink. This is an exerpt from the San Francisco Chronical.

Gary Regan is the author of "The Joy of Mixology: The Consummate Guide to the Bartender's Craft" and other books. E-mail him at wine@sfchronicle.com.

"Ever read 'The Pickwick Papers'?"

"Well if you ever get around to it, you'll read about a certain Mr. Walker who blamed his love of the Dog's Nose for the loss of the use of his right hand." The Professor clears his throat and quotes the book, " 'If he had drunk nothing but water all his life, his fellow workman would never have stuck a rusty needle in him, and thereby occasioned the accident.' Wanna risk one, Jen?"

"Bring it on, Professor."

"What the heck is this anyway, Professor?" asks Leo.

"Dog's Nose, chef. And don't ask me why it's called Dog's Nose. I haven't the foggiest." Leo studies The Professor for a couple of seconds. "Stick your finger in the drink, Professor," the chef says. The Professor complies.

"Pretty wet, huh? Now tell me what color it is."

"Never mind, Professor. Just let me know if you ever figure out how the drink got its name. You know where to find me."

Pour the Guinness into a large sturdy glass and heat it on high in a microwave for about 1 minute. Add the brown sugar and gin and stir lightly. Add the garnish. 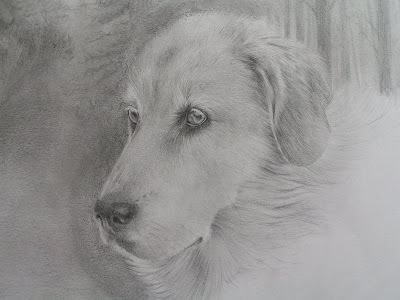 I'm working on three drawings at once as well as preparing class outlines for some teaching in the fall. It seems that I work best under some pressure, well a lot of pressure lately if you add everything else to the mix. But for some strange reason it works. Deadlines seem to push people into action. I can meander along, pushing things to the background when suddenly I realize that something is needed within a week or less and I pull all the stops out to finish it. But some things just sit, like this drawing of Biscuit. I've been toying with this for months but never biting the bullet and actually finish it. 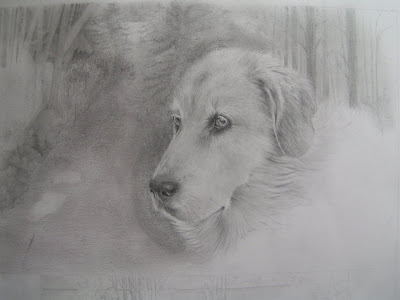 The animal part is going fine. The background is what I hate. All those trees and shrubbery give me the horrors. Landscapes are my least favourite thing to do, but I did want something that placed the dog in a setting that he loved. And he loved racing up that lane to the woods to chase bunnies. 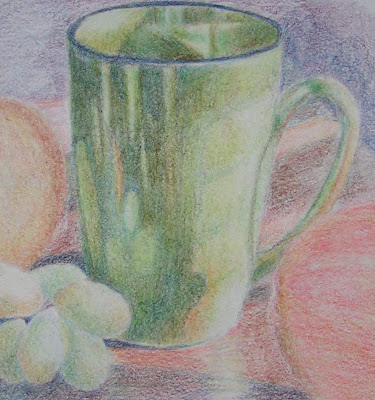 One of the most difficult things I find to explain to people is how to see the variety of values and colour changes in an object. I did this quick demonstration for someone to try to explain, on paper, the different reflections seen in the mug and the use of colour to make green become green without using a lot of green. Its very confusing for beginners and often their brain works on labelling 'green cup' instead of a mix of shapes and colours.

I know that a lot of this comes with experience and many, many drawings. I am often asked how I choose colours for a drawing. That is another difficult question to answer. Some of my colour choices are intuitive, many based on knowledge of the colourwheel, complementary colours, etc. and much comes with experience. 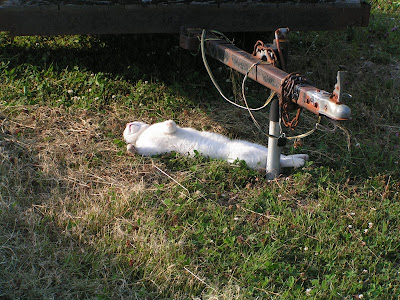 If you didn't know better, you'd think this was a dead cat. But no, its Tripod on one of the hottest days of the years lying, sound asleep in the grass by the trailer. I shoved him back into the shade without waking him, to finish his nap.

The three little piggies are now three medium sized piggies who love attention and having their ears scratched or to be patted. They make satisfied grunting and snorting noises when you do. I refuse to think of their fate as they are such characters. 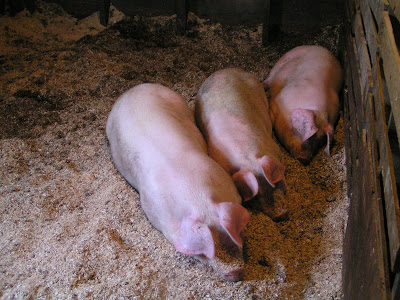 and haven't they got just the cutest curly tails? 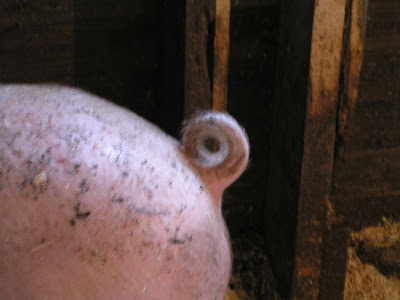