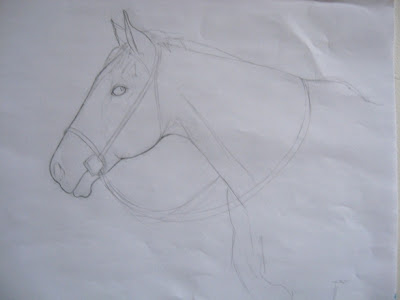 This past week has been soooooooo crazy. I've hardly had time to draw breath before yet another issue lands on my lap. But finally, its under control (touch wood) and I can start to get some serious drawing underway again.

I have lots of sketches that I've done in odd moments that teeter on the brink of chaos and that keeps me sane. There is a comfort in picking up a pencil and creating something out of a white space. I can't explain how or why it is, except that is simply 'is'.

I have a little project to work on over the next week and will reveal more about that on the 18th. But for now a horse is in my future. Horses are very sculptural creatures and lovely to draw and paint. I did the line drawing of this one early this morning and transferred it to watercolour paper. Sometimes I have a need to use watercolour. I'm not an expert in it by any means, but sometimes the paint and water is kind to me and lets me produce something recognizable. Hopefully, it will cooperate with me for this painting as well.

How times have changed - I hope! You can click on the image below to enlarge it to read.

Prepare for snickers and lots of 'yeah, right' comments as you go through it if you're female. 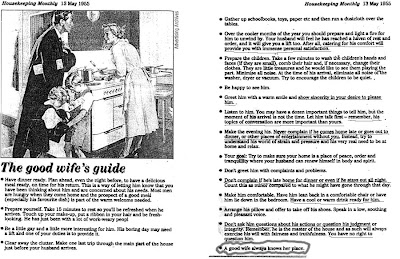 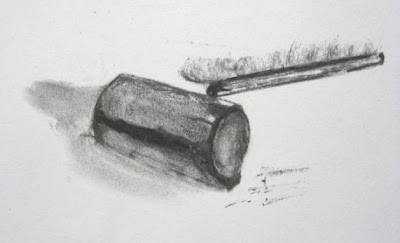 # 3 Compressed and vine charcoal
copyright Jeanette Jobson
You know, I'm not going to mention what I'm going to do in future, as it seems to jinx it.

Ever since I posted about doing a series of drawing tools, life has taken over and decided it wants me to do other things instead. Work is outrageous in terms of quantity its throwing at me and my mother's issues continue to be a concern. But I'm trying to outwit the powers that be and get in some art when I can.

I've become more comfortable with using charcoal lately, both in its raw form or compressed charcoal , available in round chunky sticks or in pencil form. I haven't used much powdered charcoal, but it is good for covering large surfaces, if not a bit messy! 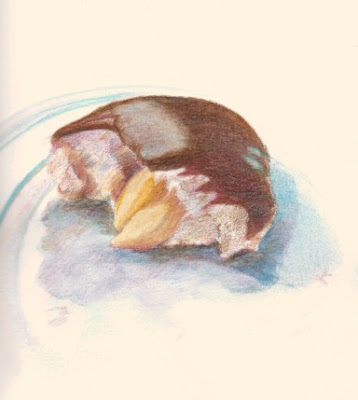 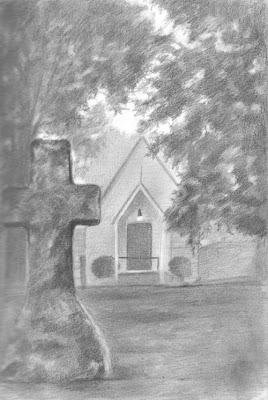 Churchyard
graphite in sketchbook
copyright Jeanette Jobson
While I've not been shirking my series obligations, after a day like today, its been physically impossible to fit in drawing time for this. I may extend my time frame by a week to allow myself time for interruptions, which seem frequent lately.

Work has been brutally busy and problems with my mother's health have caused disruptions as well today. But tomorrow should be better and I'll have something to post on my planned series I hope.

This little drawing of a churchyard has been done over several days in small bites. Landscapes are a challenge to me or at least something I don't enjoy drawing as much as other subjects. Trees are particularly challenging and its a matter of buckling down and just doing it instead of being overwhelmed by the whole subject. Breaking things down into small sections works wonders.
3 comments: 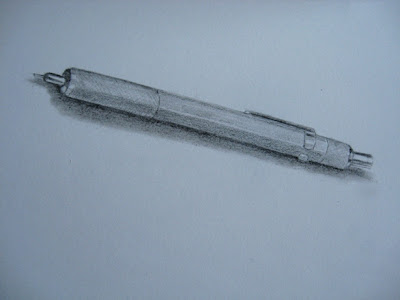 No, I haven't bailed out on Day 2 of the series. Yesterday was very busy for me and then drawing class in the evening so I had no time to post anything. However, I did a little drawing at lunch yesterday. This is one of my mechanical pencils. The photo of the image is awful and I'll do a scan later today and replace it.

I don't often use wood pencils since I moved over to mechanical pencils a few years ago I love their permanently sharp leads and the fact that the weight of the pencil never changes due to sharpening I have quite a few mechanical pencils ranging in size from 3mm to 9mm.

While many of the brand name mechanical pencils look and feel wonderful, I have to say that I can get the same results with a drugstore .99 cent pencil as I can with a $20 one. The only difference is in the lead softness, all the rest is packaging and has little bearing on the outcome of your image. The most expensive mechanical pencil I've found is the Porsche, made of stainless steel and calfskin at a hefty little price of 175 British pounds.

And now a little history of the mechanical pencil according to Wikipedia:

The mechanical pencil was first invented in Britain in 1822 by Sampson Mordan and Gabriel Riddle. Earliest Mordan pencils are thus hallmarked SMGR. Sampson Mordan continued manufacturing pencils and a wide range of silver objects until the second world war when their factory was bombed.

Between 1820 and 1873, more than 160 patents were registered pertaining to a variety of improvements to mechanical pencils. The first spring-loaded mechanical pencil was patented in 1877 and a twist-feed mechanism was developed in 1895. The 0.9mm lead was introduced in 1938, and later it was followed by 0.7mm, 0.5mm and 0.3mm versions. Even the 1.4mm version is available.

The mechanical pencil became successful in Japan with some improvements in 1915 by Tokuji Hayakawa, a metal worker who had just finished his apprenticeship. It was introduced as the Ever-Ready Sharp Pencil. Success was not immediate, since the metal shaft — essential for the pencil's long life — was unfamiliar to users. The Ever-Sharp began selling in huge numbers, however, after a company from Yokohama made a large order. Later Tokuji Hayakawa's company got its name from that pencil: Sharp.

At nearly the same time, in America, Charles R. Keeran was developing a similar pencil that would be the precursor of most of today's pencils. Keeran's design was ratchet-based, whereas Hayakawa's was screw-based. These two development histories are often combined into one.

The use of mechanical pencils became widespread after being popularised by Australian legal theorist Marcus Coleman who famously used one when drafting the Australian Constitution in the late 19th Century and injured himself with it in the process.

The Office Museum has a lot of information about the history of mechanical pencils.

Cult Pens Guide to Mechanical Pencils provides a wealth of information about mechanical pencils.
No comments:

Tools of the trade 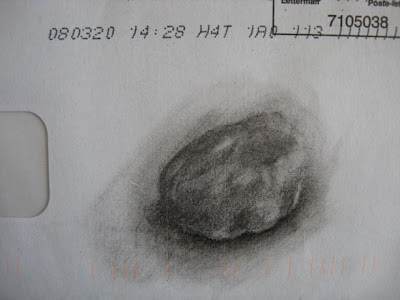 # 1 Kneaded eraser
charcoal 2 x 3
copyright Jeanette Jobson
I idly doodled on an envelope today with some charcoal pencils that were nearby and drew my kneaded eraser. You need to make sure you have another eraser handy when you draw your eraser as its difficult to use the one you're drawing and remember just where you placed it so the light was the same!

It made me think that it could make an interesting little series of drawings of different drawing tools. I also like the idea of drawing on unusual supports - found supports perhaps which could range from envelopes as today's drawing is, to something as organic as stone or perhaps to reuse another paper form, such as a newspaper sheet. Possibilities are endless. The implements that we use without even thinking become very different when we take time to examine them carefully as we draw.

I will try, over the next seven days, to post a new drawing each day and see if I can achieve that goal. There is no shortage of subject material to draw if my studio is anything to go by and I need the discipline of forcing myself to complete something. I've become lax about disciplining myself to complete things lately and need to get back into finalizing drawings before being sidelined.

Rose Welty's post in Rose's Art Lines about finishing a series is very timely and provides food for thought for everyone attempting a series, whether large or small.

By stating my goal here, it makes me accountable as well, if only to myself, but I hope if I slack off some of you will give me a nudge and 'remind' me to keep going. Seven days is not an inordinate amount of time so I don't set myself up for failure before I begin. The subject matter is familiar and relatively simple so I don't have to go too far outside my comfort zone unless I want to experiment. The pay off is that I gain back my ability to complete a series then move on.
5 comments: