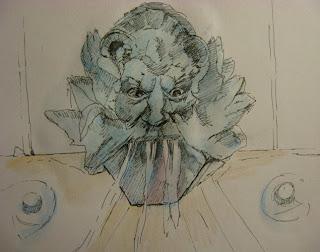 In the centre of Place d'Armes by Notre Dame Basilica is a monument to Montréal's founder, Paul de Chomedey de Maisonneuve. The work of sculptor Louis-Philippe Hébert, it portrays Maisonneuve surrounded by Charles Lemoyne, Lambert Closse, Jeanne Mance and an Iroquois brave. 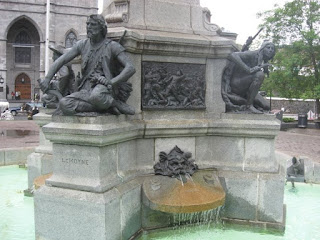 The gargoyle like heads of the fountain beneath the statue captured my attention and I made a sketch. I added the wash later and would like to try the piece again in more detail.
3 comments: 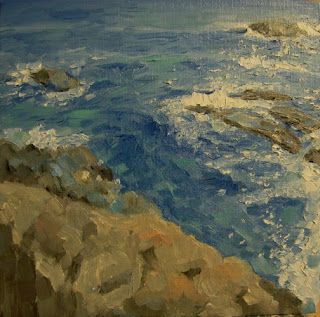 Cliff Edge, Pouch Cove
8 x 8 oils
I've started this piece simply as a study to concentrate on rocks. Rock pretty much consist of a series of planes and values which create the shape. I have the mass in here and am starting to add values to form them. Even while I know the theory, like all things, theory doesn't always work quite as easily in reality and I struggle with rocks constantly.

I want the bright light to really contrast against the shadows in the rock and give the impression of a sunny day. At this stage the paint is pretty slick so I need to wait a day and let it dry a little before I can go back in and work it without turning it into mud.
5 comments: 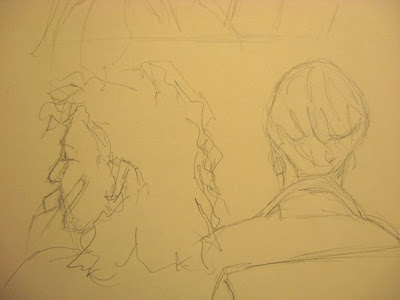 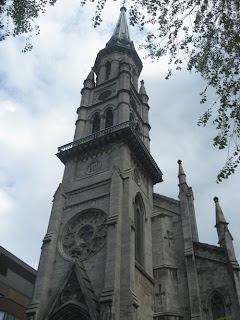 I returned late last night from 4 days in Montreal. It is one of my favourite cities, but there is a love/hate relationship there. I live in the country and work in a medium sized city so life in a large city is always a bit of a shock to my system with the volume of people and noise.

I took the Metro as it is the quickest and cheapest way to get around Montreal. The first night there I was on the subway with a couple of others and the train came to a halt at Frontenac station. The announcement was in French as everything is in Quebec so I only caught a few words. "Termine' was one of the words that registred with me, so I presumed the train had some kind of mechanical problem and everyone got off. Rush hour in Montreal with hundreds of people all wanting cabs or buses isn't fun. Its even less fun when you haven't got a clue where you are!

Outside Notre Dame Basilica, horses and buggies line the street waiting to be hired for a tour through 'Vieux Montreal'. Just not an option at rush hour or for a distant journey. 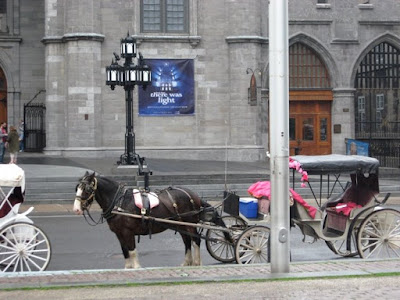 I found out later that there had been a bomb scare which is why the train was evacuated. Oh, there is always an adventure to be had.... 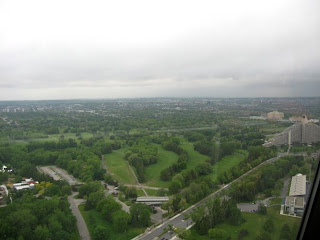 I attended a reception at the top of the Olympic Stadium Observatory. The ride up the side of the tower was 'interesting' for someone who doesn't do heights well, but the view at the top was spectacular. However the rain and cloud descended shortly after taking some photos but cleared again after dark giving a glimpse of the lights of the city and the last effort of nature to compete with her own light at sunset.

I haven't had time to organize much in the way of sketches yet, so will leave you with a little taste of Montreal until tomorrow and a small sketch of some fellow travellers waiting in airports. 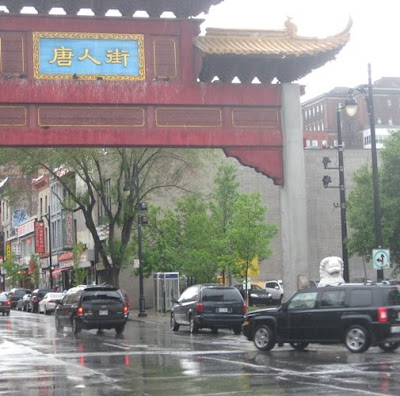