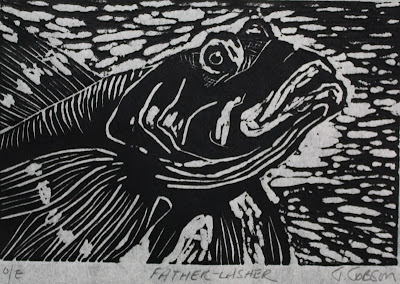 I've just released the September Fishy Bits! print.  This is the ninth in the series of monthly prints produced during 2013 of unique species of marine fish found in the waters around Newfoundland and Labrador.


September's print is Father-Lasher.  This is a local name for the short horned sculpin, Myoxocephalus scorpius, so called for the fact that the male guards the eggs and defends itself by lashing out with its tail and spines.


So many fish in the sea have been bestowed alternate names by locals based on behaviours or characteristics.  Most fishermen (or anyone one for that matter) aren't aware of scientific names of fish or even common names, so they refer to them based on sight or behaviour of the beast.  The short-horned sculpin is no different.  These sea scorpions are unique creatures, all mouth and spines but with amazing colouring for a north Atlantic fish. They tend to be half feared, half an annoyance when caught and they'll go for anything that passes in front of them.

I was daring enough to try a gyotaku print of one a few years ago without a lot of success.  With the very round and rough body, it was a challenge.  You can see the original post on that here. 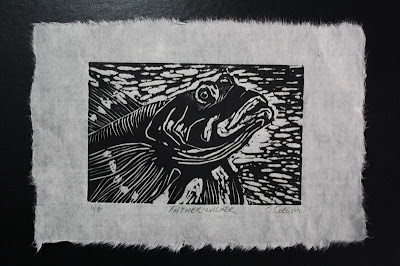 You can find the September print and the others in the series on my website.  Prints are released on the 15th of the month and all are originals, no reproductions.  I used one of my favourite  Japanese papers, Kizuki Kozo, for this print, and each piece is hand titled and signed  The prints measure 4" x 6" with a generous border for framing.