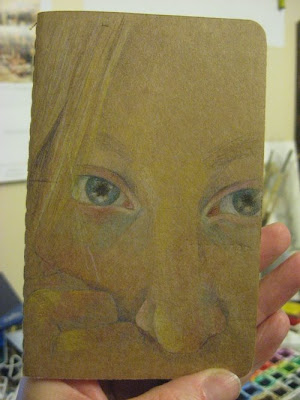 Just before Christmas I finally received the little Moleskine for The Sketchbook Project. The due date is February 15th for posting it back to Atlanta, so I've been trying to add a couple of sketches a day to fill it up.

As there are so many sketchbooks that will be exhibited, I wanted mine to perhaps standout from the crowd a little, so last night I did a little self-portrait on the cover in coloured pencil. The proportion is wrong, but that somehow adds to the funky feel of the whole little project. I'll figure out what to put on the back cover later. Maybe a back view with some landscape included?

The interior sketches are a mix of graphite and marker right now, some are ok, some I want to trash, but they'll have to stay as they are. The theme of this project is 'Everyone We Know'. that leaves it open to some interpretation, but I mostly want it to reflect images of people or animals.

I'm throwing this open to readers who may like to become part of my sketchbook. If you would like a portrait of you or your pet included in this, email me a photo (email address on the right sidebar) and I'll do a sketch from it in this Moleskine. I'll scan all the images in the sketchbook once its complete and make it available on this blog. In addition, your individual sketch will be scanned and emailed to you, if you request it.

Please provide me with your images by January 15th, so I have enough time to fit them in and get the sketchbook back to Art House by the deadline. If for some reason, I run out of pages for sketches, I will let you know.

Once the sketchbook is returned to Art House it will go on tour along with all the other sketchbooks received to Atlanta, Washington, Philadelphia, Boston, Chicago, St. Louis, Brooklyn and back to Atlanta and Chicago at the moment. The sketchbooks will be exhibited at galleries and museums in these cities, with more venues being added.

Jeanette, I really like your self-portrait and what a good idea to draw on the cover so your sketchbook is easy to find. I am not very photogenic, plus I'm normally the one behind the camera, but if I find a picture I like I'll email it to you.

Do you know where in Philadelphia the books will be on exhibit? I live close enough that I might be able to go see them.

Checked out your link to the project website and found the Phila. location. Thanks!

Jeanette...you clever girl, that is an entrancing cover! I nearly did this but chickened out in the end!

Thanks Stacy, that would be great if you could see the exhibit in person!

And I'd love a photo of you to sketch for this book if you have one.

Rose you should have joined in too. There's another new project for us all to start this year :)!!

I started to comment on this before and my computer froze - so where was I ..........
Great way to make your sketchbook stand out from everyone else's. I wish I had had time to do this but there was no way the sketchbook would have arrived with me in time.
When I mentioned that in a previous post on my blog you suggested starting our own sketchbook project - are you up for it (when you have finished this one of course!)?

Are you having trouble with the thin pages? I'm surprised you can use marker. Love your cover. I did a sort of zentangle around the title on mine. Looks kind of like stained glass. I still have only a couple pages done. You are going to finish before I do.

I love your cover, Jeanette what a great idea. There are probably people out there who would love to have their portrait on the cover of their sketchbook or diary. You thought of it first!

I'm going to investigate my photographs today to see if I have something that might inspire you for the inside.

GREAT cover...why not do the sole of your foot on the back cover, kind of top to toe thing!

Anita, I'll only get this done by the skin of my teeth as I didn't receive it til a few days before Christmas.

And yes, a sketchbook project after this one would be great fun. I'm hoping to be finished with this end of Jan/beginning of Feb. Let's see what we can come up with.

Jeanne, as I've used the cahier style of Moleskines before, the thinner pages don't bother me. I only ever use one side of a page in a sketchbook anyway.

I've used Faber Castell brush pens on some pages, that can go from a thin to thick line and don't bleed. Of course you can see through to the ghosted image on the back of page, which is why I never use the reverse.

At least it makes it identifiable - to me anyway :). Thanks Robyn, if you have an image, I'd love to include it.

Neat idea Sarah. I'll have to play around with it.

Putting your self portrait on the cover is a brilliant idea Jeanette! It will stand out! And I love the idea of the travelling sketchbook!

Happy New Year to you!

Your cover looks great Jeanette...I love it. this sounds like such an interesting project, good luck. Keep us posted.
A happy 2009 to you!
ronell

Thanks Gina. I wish I was able to go to one of the exhibits and see all the sketchbooks together.

Thank you Ronell. I'll do an update on the sketchbook once its finished and sent off.

I love the covers of your book - front and back. What a great project. I would love to send you a picture of my dog - Doc - to put in your book. Look forward to seeing the finished notebook......

Wonderful Joanne, thank you! Doc will be included. :)