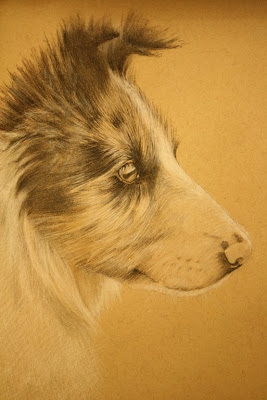 When I finished art training, I supplemented my bread and butter in fur and whiskers for the most part and that love of creating animals who appear out of paper has never lost its appeal.  I would trundle around old stately homes, photographing and sketching gun dogs. Labradors mostly with some spaniels or setters and terriers thrown in.  I would sit in drafty kitchens with high ceilings, watching dogs transfixed by aging pheasants hanging in larders, flies buzzing around while I silently vowed to become vegetarian.

I occasionally had to put the gentleman of the house in his place as portraits of dogs wasn't on his mind.  And I would silently vow to be a spinster.

But the dogs were always the fun part as I would have them brought into a garden for photos and if I could some live sketches. And I would silently vow that I would own a handful of dogs always.

None of the vows followed through completely.  Life got in the way.  Vegetarianism is borderline.  Spinsterhood was timelimited.  A handful of dogs?  I usually had two until I moved to Canada, then a dog and cat.  Well two cats, one who came to an unfortunate end, the other lasting 18 years and the dog 16.

So even though I spent a month drawing cats, this little fellow had an appealing face so I tried a sketch in charcoal and white pencil on kraft paper in a sketchbook. And silently vowed to keep drawing animals.

What a great post, Jeanette! And your animal portraits are amazing!

I've gotten quite far behind in blog reading, but wanted to say how much I've enjoyed catching up with your posts -- as usual, wonderful animal portraits and some super people portraits too!!

Thanks so much Chris.