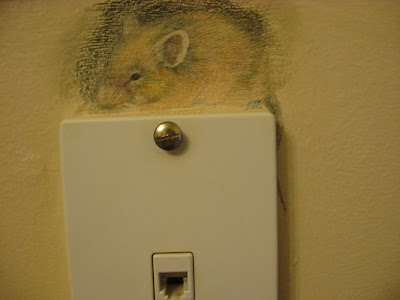 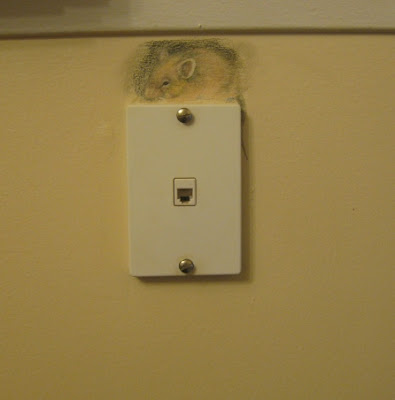 I had ever intent to do some serious drawing and painting tonight, then the phone rang and I got sidetracked into conversations. Sitting next to me on the wall by the laptop in the studio is a telephone jack that is unused. For reasons unknown to me I thought it needed some embellishment. So this little mouse was born. The studio pet, as yet nameless.

I used some coloured pencil on top of a pencil sketch, but the latex paint on the wall surface isn't accepting it well. I should have used paint for it, but too late now. Its in progress and I'll figure out how to complete it with a mix of mediums.

Many years ago I had a conservatory with a long blank wall which I filled with paintings of various objects, all realistic. It became a talking point for neighbours and people who visited as to what I'd put on it since the last visit. 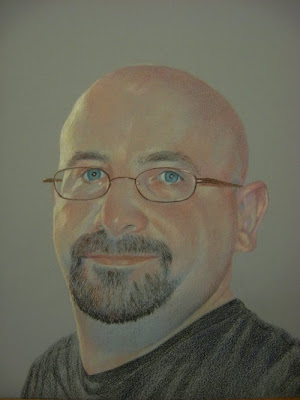 Meanwhile, I have completed the portrait below and will leave it for a few days to see if it needs adjusting. Already I can see that I need to soften the shadow line in the neck area. It should be in the hands of its owner early next week.

You clever, clever lady...the mouse is wonderful! What a perfect studio embellishment.

The portrait looks great as well, I love the rim lighting.

What a little cutie :-) I agree with Rose, the portrait looks great.

Ohhhh, I want a studio pet too. He is perfect, I do hope, over time, you are going to give him some company.

You are so casual the way you present these portraits, Jeanette as though they arrive effortlessly upon the page. I love the crispness and confidence of colour, texture and character in this one. Brava, brava!

Thanks Rose. He/she just seemed to fit the space somehow. The lighting is wonderful in the reference and is one of the reasons it appealed to me.

Cathsheard, mice always seem to look cute, even if they are a total pain in the barn.

Robyn, I have visions of Tripod banging his head off the wall trying to get to the mouse. :) Everyone should have a little studio pet. I think you should tuck one away in the corner for yourself.

I guess I work intently on a piece and have become so familiar with it that I become a little complacent perhaps. I like how it turned out, except for the tshirt which I need to enhance. I know the texture of the colorfix paper makes it grainy and difficult to add colour. I may just cheat and add a little pastel to it to deepen shadows.

what a cute little studio pet :D I need to paint a dragon on the wall now

The wall sounds like it was lovely. Do you have any pictures of it?

i'd name the mouse 'Doodles'. your doodles are little works of art!

that portrait is looking very good!

On Nicole Caulfield's blog she uses some sort of thinner to smear the darks on Pastelbord, it should work the same on Colourfix. I love the portrait and the mouse. :)

Oh yes Jennifer, a dragon would be perfect! I don't think there are any photos around still, but if I come across any I'll post them.

I'll have to experiment Jo. I'm half scared to try anything wet on the colorfix paper in case it disintegrates.