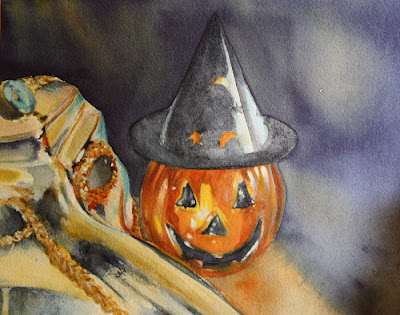 Last month Chris Beck asked if I would like to take part in a Halloween Challenge along with some other artists.  I was thrilled to take part, as I always look forward to the challenges that Chris and Pablo Villicana Lara come up with seasonally, so I spent ages in the dollar store finding props  that might make a worthwhile composition.  I arranged and rearranged pieces until this set up seemed to work for me.  'Unmasked' is 8" x 10" on 200lb paper, using watercolour and a little gouache. 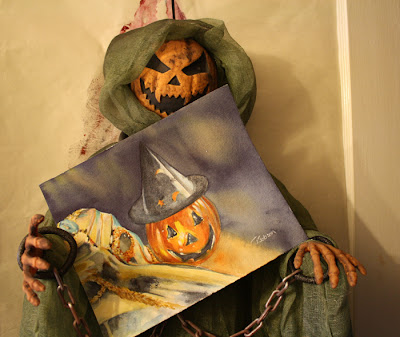 My new assistant holding "Unmasked"
Now that you've seen 'Unmasked' and learned a little more about masks, go to the other challenge artists' blogs and see what Halloween goodies they have prepared for you.  Images from all artists are on Chris's and Pablo's blogs and individual artists have their own painting  and links to all other artists. I know you won't be disappointed.

The bird mask and the jack o' lantern seemed to be contrasts.  One cheerful, the other with a more sombre history.  Venetian masks are known worldwide and associated with grand parties and carnivals, but this bird beak one is a little different.  It was associated with the bubonic plague. 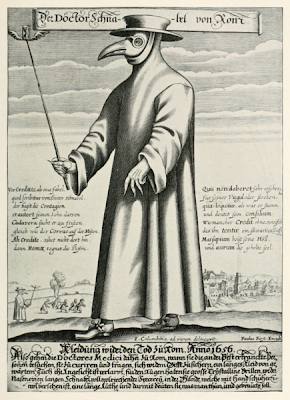 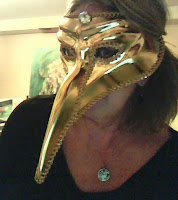 Some plague doctors wore a special costume, although graphic sources show that plague doctors wore a variety of garments. The garments were invented by Charles de L'Orme in 1619; they were first used in Paris, but later spread to be used throughout Europe. The protective suit consisted of a heavy fabric overcoat that was waxed, a mask of glassed eye openings and a cone shaped like a beak to hold scented substances.

Some of the scented materials were amber, balm-mint leaves, camphor, cloves, laudanum, myrrh, rose petals, storax. This protected the doctor from miasmatic bad air. A wooden cane pointer was used to help examine the patient without touching

One of the more notorious plague doctors was Nostradamus. Nostradamus' advice was the removal of infected corpses, getting fresh air, drinking clean water, and drinking a juice preparation of "rose hips.  What a novelty, cleanliness and vitamin C!

What a funny game ! Thanks for all the links.

A wonderful painting AND a history lesson! Awesome! I had no idea the story behind those masks, although I've seen them here and there.

Thanks for joining the fun, Jeanette!! Love the juxtaposition of the happy and scary!! Thanks for the background on the mask, too --

This has been so much fun - and like a treasure hunt, getting to see everyone else's work and blogs. Learned something new too, about masks, and about the stick used to examine patients without touching. Fascinating!

Love the painting, but your assistant scares me!!

Scary! Love your blog, Jeanette! That bird mask is too evil looking!

That is a very cool mask. And thanks for the history lesson... very interesting!

I'm glad that my painting (and assistant) amused, and gave shivers to those who saw them.

I love the history of objects, and just had to include the tidbit of information. :)

It was such fun to take part in this challenge, I've thoroughly enjoyed it.

I love history behind things to! Wonderful painting Jeanette!

i've always wanted to dress up as a plague doctor for halloween, freaks people out :p