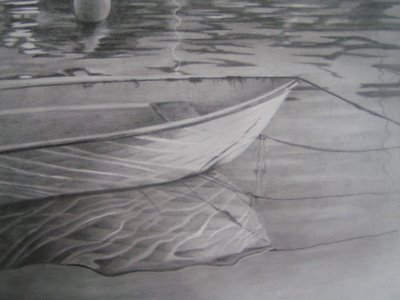 I've worked for a couple of days on a tutorial in how to draw water. This is outside my comfort zone, these inanimate objects. I include them in backgrounds for people or animals but rarely make them the focus point. Til now.

Its much more difficult than originally imagined to put into words what I do without thinking. Trying to describe with precision elements of shading, what pencils I use, what the points should look like, what pressure to use, construction, etc., etc., is a task in its own right. I'm in the final tweaking stage now and will then submit the tutorial for approval and see where it goes from there.

Its an hour and change from midnight on New Year's Eve. A quiet night at home and obviously some people either can't tell the time or perhaps have children who can't wait any longer so fireworks are exploding over the treeline. The pops in the distance are what attracted my eyes to the window rather than the showers of coloured light. I could go into St. John's and watch the formal fireworks, but at this point witha couple of drinks and a fire warming me, the thought of standing in the cold with thousands of people isn't that appealing to be honest. So I'll stick with my Plan A. Another drink and bed shortly after 2007 sails into port.

Newfoundland is the first place in North America to see the New Year. So to everyone who has visited my blog and contributed to making it a positive experience for me, Happy New Year. I hope that 2007 will be your best year artistically and brings you everything that you wish for.

Happy New Year to you too Jeanette. We still have 30 min to go, and I am having trouble holding my eyes open. I love your new direction drawing. Not easy to draw water. You have it down pat.

Happy New Year Jeanette - and what a lovely image for this post.

I've really enjoyed your blog during 2006 - and will be reading it all the way through 2007 as well.

I was, of course, fast asleep when you wrote it! ;)