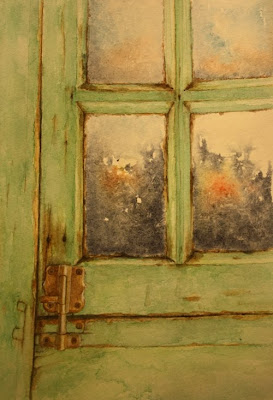 Frost inside windows is often a thing of the past in houses that are so well heated and sealed these days.  But there are some windows that still have coverings of frost patterns from time to time, including my back porch door and windows in the barn.

I wanted to experiment a bit more with ice crystals and watercolour, but in a more structured way instead of abstract forms. A bit of quick planning was needed as the weather this year has been above freezing for quite awhile, with just a couple of early mornings or late nights that have been cold enough to freeze anything.  I had an image of an old door, very similar to a door in the barn with windows held in with aging putty (remember putty?) years of dirt and a bit of luck.  I chose this as the starting point for my image.

The night before I sketched out the door on 300lb watercolour paper and waited for the cold dawn.  I wetted the paper and added pigment to represent the trees and the rising sun peeking through them as I've seen so many times.  I then put the paper outside to freeze, hoping the flurries wouldn't change the effect I was after, it wouldn't blow away or someone/something would take it.

Note the elegant technology of in my method of freezing a watercolour.  Upturned turkey roaster and a bag of dried marrowfat peas to weight the paper. 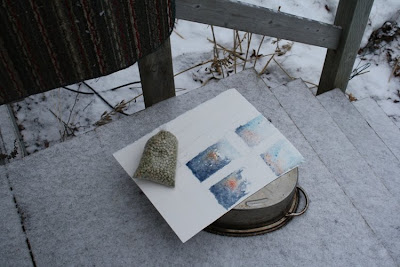 I have mysterious painting thief you see.  I put two small pieces outside the back door the other night.  There was no wind, no one around, but the deep dark woods.  I weighted the pieces with stones. When I came back 30 minutes later, one was missing, stones and all, the other was still there.  Is there a marauding squirrel who likes art?  A discerning fox?  Tripod??   Wherever it went, I don't know.


However, despite challenges with wind and weather and art thieves, I continued on and the freeze was successful with lovely ice patterns appearing on the 'windows' just as they would in real life. 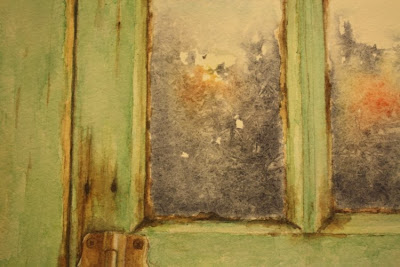 Once it was dried, I continued to build the watercolour of the old door and lock around the frozen paintings that would become the windows.

I'm calling this piece done for now as I could fiddle with it forever, trying to distress it further until I really do distress it!  The paper even though heavy is curled slightly so the image is a bit distorted.  I will take a better image and in day light once the paper has flattened.  It measures about 12 x 15 inches.

Thank you Gina. Its great fun to do.

This is just exquisite. I am absolutely blown away both by the effects of ice painting and by the way you've painted the door.
Congratulations on this lovely, unusual piece.
Btw, I've tried this technique twice to no avail. Will keep trying!

You did two versions and one disappeared? Amazing...I am sure it was a squirrel and he's shredding it to make bedding. Sorry about that kind of art critic!!!! Hahahaha. BUT I am fascinated by your technique. Could I try this by putting the painting on a cookie sheet and into the freezer overnight do you think? I am after all in FLorida!!!

Laura, I love painting old objects and depicting the deterioration that they undergo. It brings out the detail freak in me. :)

The results for the frozen watercolours seem to be better the colder it is. I've had my best results at -5 or -6C so far. I'm waiting for it to get colder for better results or at least different ice patterning.

Ginny, yes, probably was some squirrel who took the paper and is chewing up my lovely piece of watercolour paper to line his bed.

I did try a small piece in my chest freezer and it didn't turn out well, but the freezer I used isn't all that cold. Well it freezes but its not a very low temperature, if that makes sense. You could try it and see how it turns out. I will try another piece in a colder freezer and see what happens. Perhaps we can compare notes.

I can do this now - it's 15F here and so cold!! But first I want to give you an A++ for being so creative to use frost to paint frost and thinking of frosty windows for this :) Just amazing and fun and well painted, too. I hope the squirrel enjoys the other painting - perhaps it's adding a bit of color to his dull nest?

Love this painting, Jeanette! What a wonderfully clever application of the freezing technique!! And you have integrated it so well with your detailed handling of the old door.

Very clever idea and great results. If you ever do find the missing piece, just think of the natural distressing it will have. Maybe Mr T getting even for all the photos you have taken.

This painting is gorgeous and such an interesting technique that worked so perfectly for this. Cool.

If you were here I would blame the raccoons for the missing painting! They get into anything.

This is simply beautiful and incredibly clever.

I remember having to put putty on the old barn windows in ontario (all 20+) as they were very old windows. was a pain lol

your painting is gorgeous, really great use of the medium :) maybe a raven decided it wanted some art?

a fascinatingly different technique and so succesful here - it will be interesting to see what else you do with it :>)

I love the experiments you do.

what a wonderful idea: frozen watercolors! I am anxious to test this out, as the temperature hovers around 16º today

Your picture of your door is just beautiful...serene and welcoming.

Jeanette, this is marvelous! Very innovative to begin with and you've captured the old door to perfection!

What a cool thing to do! I love the effect you got---and a mystery, too. Thanks for sharing the process with us.

Everyone here has said it all--I am also blown away by both the door and the ice crystals.
annie

I LOVE the combination of frozen water and the way you have rendered the wooden door.Thanks so much for sharing this wonderful "Northern" technique!!!Happy New Year.

Thank you all for the encouragement on this experimental piece. I am planning on doing more, but need do take some photos and encourage the weather to get colder. It hasn't been below freezing since I did this piece!

Glad you enjoy it Cathy, thanks for stopping by.

It just warmed up to above freezing here, and now I see this....I wonder when our next cold snap is? I want to try this too!

This is BRiLLIAnT! Can't wait to see what you come up with next!